Maize is a first person point and click puzzle game. You play as ummmm… well if you base it off the one character that says your name, it’s Stupid. You are Stupid. Enjoy that I guess. Your character doesn’t speak but everyone else does, a lot.

The game can be completed in under two hours without much drama since there’s an achievement for doing exactly that. Your first playthrough will probably take a bit more than that though. The game starts you off alone on a corn farm, eventually you get into a secret US bio-weapons research facility and you even find yourself a companion who tells you your name of Stupid. I love that I get to call all you readers Stupid without getting in trouble; this is making me laugh a lot. 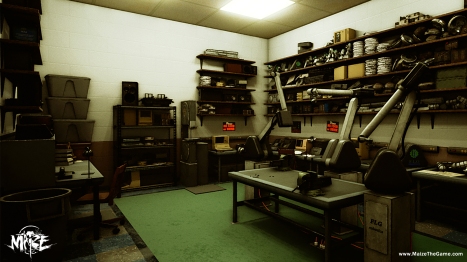 I can’t really tell you anything about the plot as you are just doing stuff until you’re told WHY you’re actually doing it but once you’re told why the entire plot is explained by that tiny bit of info. There are a bunch of characters in the game: a handful of talking cornstalks who you meet near the start; your robotic bear companion Vladdy who hates the US and is incredibly rude to everyone, you included; a smart-ish red corn cornstalk; a psychopathic cornstalk; some scarecrows; some drones; and four humans… sorta anyways. The only ones not voices are you and the four humans you kinda meet. I guess the drones are more people but you know whatever fuck it, they’re just drones, no people behind them that’s my new rule.

Nothing in the game really makes sense at all. And it’s designed to do that. The puzzles however are all fairly straight forwards things that react like they would if it was in real life instead of a game. As such if something metal is broken you can find the two parts and weld it back together with a propane tank and an arc welder. Pretty simple no? Granted some bits don’t make sense like CD’s unlocking doors, but we can’t live in a sensical world, fuck that. 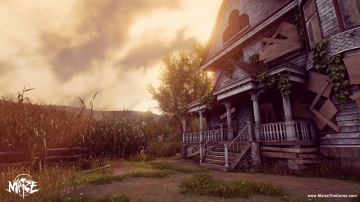 There’s a story about what you’re trying to do, but inside the bio-weapons facility there’s another story, it’s effectively a prologue to the events of the game which is written via post-it notes found throughout the facility between the, you guessed it, four humans that you kinda meet and never speak. Shocking post-it notes can’t talk but fucking corn can. Someone was really REALLY fucking high when they created this game and you know what? I’m okay with that. Much love pot-head game creators, you do you; just bring us more good games.

I… uhh… don’t really have much else to say other than I think the game is hilarious. It is a bit boring in places because the game just isn’t really exciting, it’s funny that’s it. Like you’ll be just moving around like meh, then there will be a character interaction and it’ll be hilarious or at least amusing to listen to. This game is very point and clicky, for me those kinds of games are boring in general so maybe it won’t bore anyone but me, I don’t know. So once more it’s not an exciting game but it’s damn funny. I think if they condensed the game or had more character actions it would have been better for me because that’s what I liked, and more post-it notes those always gave me a chuckle; I fucking loved that shit.

A review copy was bought by the reviewer.

darkmikasonfire has awarded Maize The Indie Gamer Team Seal of Approval purely due to Vladdy.