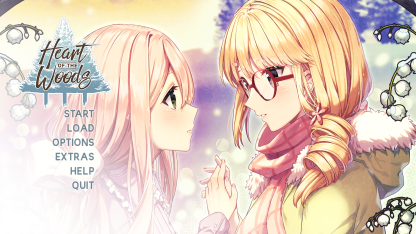 Heart of the Woods is a lesbian adventure VN, in other words, you have choices and it has endings based on them. It focuses on a duo named Maddie and Tara. They’re from a Youtube paranormal investigations program called, and I shit you not, Taranormal… the pun, oh god the fucking pun, it’s terrible so, so terrible. They’ve gone out to some remote village in the snowy forest for one last outing together as Maddie has stated she’s only doing one more then leaving the group. Maddie is the subdued realistic whereas Tara is a total playgirl and fairly blatant lesbian (YAY, this is totally me). They’ve come to this remote village at the behest of a girl named Morgan who contacted their show, upon arrival Tara immediately tries to hit on her (this is all sorts of me). I love Tara, she’s the best.

Right off the bat, they have features to help with accessibility something you don’t see much in VNs, which is actually rather cool. Options for screen shake, an option for the game to pop up info that describes a noise and also tells you the name of a song playing, and even a pictorial description option; all of which I was thankful for. Screen shakes make me sick and I love being able to read noises as not all of them register correctly for me. Also being able to see and then look up any good song in the game is AWESOME. I don’t know if picture descriptions were working in my game, I don’t think I’ve seen it work thus far which is a shame. I like the concept of this as sometimes a dog is just a dog; it’s good to know what a picture means because the writer states what they mean instead of ascribing your own opinion on it.

The only problem with these descriptors is, quite simply, that they’re in the top left hand corner of the screen, fairly small at that, and only show up briefly. I’ve missed almost every last one of them. The words on the screen, like most games, not even just VNs, the text is on the bottom in the middle. It would be more useful if the descriptors would show up in the bottom right since after you’re done reading and it moves to a new scene, that’s when noises or pictures are going to change. Your eyes will already be in the right hand bottom corner from just finishing the conversation line. As such, the descriptors aren’t very useful to straight up completely useless, which is a shame cause I really like the concept. These just aren’t placed right which makes them fall through during the follow-through.

The story focuses a lot through Maddie’s point of view, but also switches to Tara, and eventually goes through the eyes of Morgan, and another character as well; bringing them from important side characters to main characters. I hadn’t expected that; then it happened and it was nice. Thanks to that, and to a twist that happens during the story I went from thinking Tara and Maddie were going to end up together to very not thinking that. I hadn’t seen it coming til BAM right in the face with it. You don’t find many surprises in a VN, just like most books, they’re fairly straight forward you can typically tell the gist of what’s going to happen because of foreshadowing. It’s nice when one can suddenly just spring a surprise on ya like that and this one had a few by the end. I originally thought it was going to be a slightly supernatural romance story, but instead it’s a supernatural thriller that happens to have a couple romance subplots, which is cool.

It’s really nice cause while yes, the romance is there, it’s not the super focus. Every scene isn’t about them being lesbians or in relationships or anything, it’s about the shit that’s going on. They just happen to BE lesbians. Like let me tell you, my life isn’t a great deal different from any of yours. We’re all just people. Like, for those of you reading this who are straight, does everything in your life revolve around you being straight? Nope. It mostly revolves around you working, paying bills, driving where you need to go, and sleeping. That’s like sixty to eighty percent of everyone’s day. This treats the relationship just like that. It’s nice for them and the relationship is new, but their lives don’t revolve around that shit. I like that. I’d state that I put my pants on one leg at a time like the rest of you, but I don’t and I refuse to believe you guys put pants on one leg at a fucking time yourselves. Who doesn’t step into their pants then pull them up and button then zip them? No one puts them on one leg at a time, that’s a waste of time… anyways tangent over. 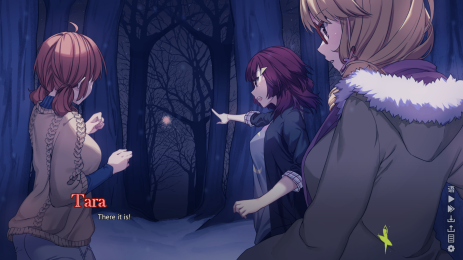 Now as I stated, it’s an adventure VN. However, it’s mostly kinetic, which is the other type where you don’t have choices. The game has four choices in total throughout the entire six chapters and epilogue. The choices have a quick change right after you make the choice then it all goes back to what you see regardless of said choice. These choices can affect the ending though. There are three endings, two are ‘bad’ ends, and one is the true ‘good’ ending. The two bad ones are sad as shit and the good one is bittersweet. All of them made me tear up, but the good one made me outright cry a little bit. I don’t know what it is with complex lesbian VNs, but they’re all fucking bittersweet, ALL of them. The less complex they are the happier they end, but all of them that are complex are just fucking sad and I don’t know why they want us to cry but they do, they’re heartless.

There is also an adult patch, which I obviously got, they are part of the story that’s cut out to be sold to younger audiences. As such, I always get them because they are PART of the story and I want the whole thing. There are two fairly short, but somewhat graphic sex scenes that the adult patch adds. There’s also a part in the good epilogue that has two of the characters sprites naked with a super sweet cute moment, and I assume that’s only in the adult patch too since they are naked. If they don’t have that epilogue scene in the main game but censored somehow or something, then I’m sad. That was a very tender sweet moment that I think really helped the ending. It was a good sweet real moment and I loved it, so I hope it’s there without the adult patch but it may not be sadly.

Heart of the Woods was developed by: Studio Élan