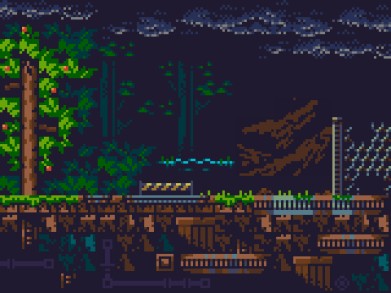 Electric Sleep, not to be confused with Electric Sheep or Electronic Sheep; both of which I’ve written instead of its correct title, many, many times… so many fucking times. I feel bad, I really do. I’m not sure any of my tweets were right and I’m pretty sure I’ve called it the wrong thing to the devs themselves even. Just remember it’s ELECTRIC SLEEP, as in “beddy bye” not, “I need to go beddy bye by counting this”, so the Welsh might not be interested in this game. Yes I made that joke, yes I know it’s terrible, I love it anyways so fuck off. Anyways… since I’m off fucking topic something fierce already, this game is an extremely short adventure Visual Novel that’s meant to be played around a dozen-ish times. Each playthrough is maybe ten to twenty minutes long. As such, it takes a few hours to completely finish the game.

You play as someone who just woke up from within a cryotube or something of that sort, and you start off emotionless. You pick the routes you go to get to the end of the story, at the end you obtain a emotion, and the game resets back to you waking up from the tube again. This time, however, you see everything through the emotion you now have. The routes you take are to the same locations, but your character sees and interacts with them differently. It was really interesting in that aspect how much a place can change based on one’s outlook. I always knew that to be true but this game really showed it and it was a very interesting take on both emotions and the perspective based on them. You eventually unlock four basic emotions which are joy, anger, fear, and sadness. However, there’s also slightly more complex ones that mix two of them like nostalgia which is joy and sadness, or even nihilism which is sadness and fear.

Again, there’s not a lot to the story, it’s 10-20 minutes long. This game instead shows a perspective of the MC when they’re focused with different emotions. I have to say the concept is really good and, for me, the only issue is it’s so short and the story is kind of a non-story. It’s like a story about going to the store to buy milk, coming home making a bowl of cereal, and then the story ends, but it’s all just the normal shit you do. It’s effectively a very tiny bit of a slice of life as it’s called, but it’s super, super tiny. I’d have preferred it to have been longer and have a more grand story than simply walking to a place, which is really all this story is about. That being said, I can understand why it was kept short. Every playthrough with a different emotion, everything that’s written is 100% different from any other playthrough with a different emotion. Something even this short, I believe it has ten different emotions, can’t be easy and is probably really time consuming as is. Also the longer the story is the harder it would be to keep emotions from mixing and blending when they shouldn’t. So I do understand why it’s so short, but still I really wanted it to be longer.

There’s three main paths, which I believe all end in two ends each for a grand total of six endings for EACH emotion of which I believe there’s ten. It should take around four hours to beat the whole game. It’s a really good time waster, and since it’s so short you can play one emotion just when you have free time then move on. It’s nice for just a little quick thing, but playing it for a long period of time probably isn’t a good idea cause, well, it’s the SAME story every time. The words change and actions change but the overall story is the same since the paths aren’t any different. Also, it seems like, even if you take the exact same route every time, you’ll keep getting new emotions. I got five or six of them in a row by going the same route.

Overall, it’s a good game. However you need to play it in small settings instead of all at once because the story is the same thing over and over even if it’s written differently each time. Playing it all at once will bore you quickly so split it up. It’s a cool concept but it’s really short. The obvious reason for that is simply how large it is when you really put it all next to each other but still any individual run is short and it just feels shorter than it really is. For a five dollar game it’s not bad, it’s pretty damn big if you wanna do all emotions and take them all down every route. For that price tag, if you’re doing that, it’s a steal cause that’s like six to eight hours at least.

A review copy was provided by the writer Jack Sanderson-Thwaite.