Shoot’em ups are a beloved genre that goes back to the early days of gaming. From Space Invaders to Ikaruga, there is always something new being done with the format. Hypership Out of Control was a game that took the elements of a shoot’em up and combined them with those of the autorunner to create a unique and addictive experience. Now a sequel has come out, does it manage to build on the experience in a new way? Yes, yes it does. 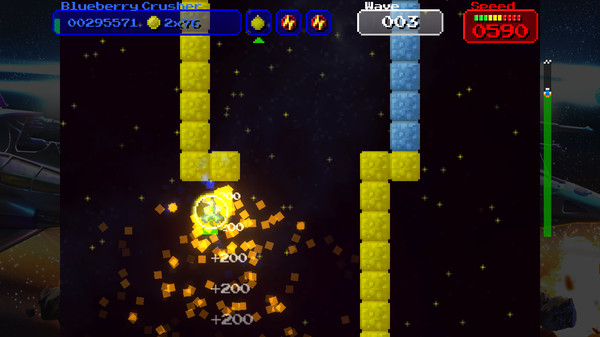 Hypership Out of Control 2 continues to mix the shoot’em up and autorunner genres but expands the gameplay from the first entry. There are more obstacles to avoid, more powerups to gain, and new ways to avoid danger. The number of ships has increased and the developer, Fun Infused Games, managed to fix a complaint I had with the original which was that all of the ships essentially felt the same the only difference being cosmetic changes. Its not perfectly fixed here, but the ships do have more distinct feel to them this time around.

One feature I like that is introduced is the branching path system. It is a small touch that manages to make a big difference. It adds some much needed variety to the level design, but I feel it could have been implemented somewhat better. This is not to say it was done poorly, but I feel there was an opportunity for more surprises to be found.

It is important to remember that this is not a game you play for the story or to beat just once; it’s a pickup and play game that you spend a few minutes on here and there. It’s a fun distraction more than anything, and that is what it was designed to be. Since shoot’em ups have much in common with autoscrolling games, the fact that no one attempted such a mix of the genres before is shocking to discover . I do like the game and I will gladly recommend it to anyone at any time.

Hypership out of Control 2 was developed by: Fun Infused Games

A review key was provided by the dev.