I’m switching things up with a Switch title this time: thinking it might be a trend. Darkest Hunters reminds me of a mix between Puzzle Quest and Pokemon Mystery Dungeon. The game is laid out level by level, with mastery points gating off later sections of the game. Overall, it has a simplistic feedback loop that works primarily because levels are so quick. It borrows from the looting systems in other dungeon crawlers such as Diablo, which can be addicting as you slowly watch your character grow. Customization options are relatively limited: you are essentially a “spellblade/ranger” capable of wielding a variety melee weapons, bows, and access to a skill tree for spells. Overall, the game left me lukewarm, but I think for the price and how easy it is to play in short bursts, puzzle fans might get hooked. 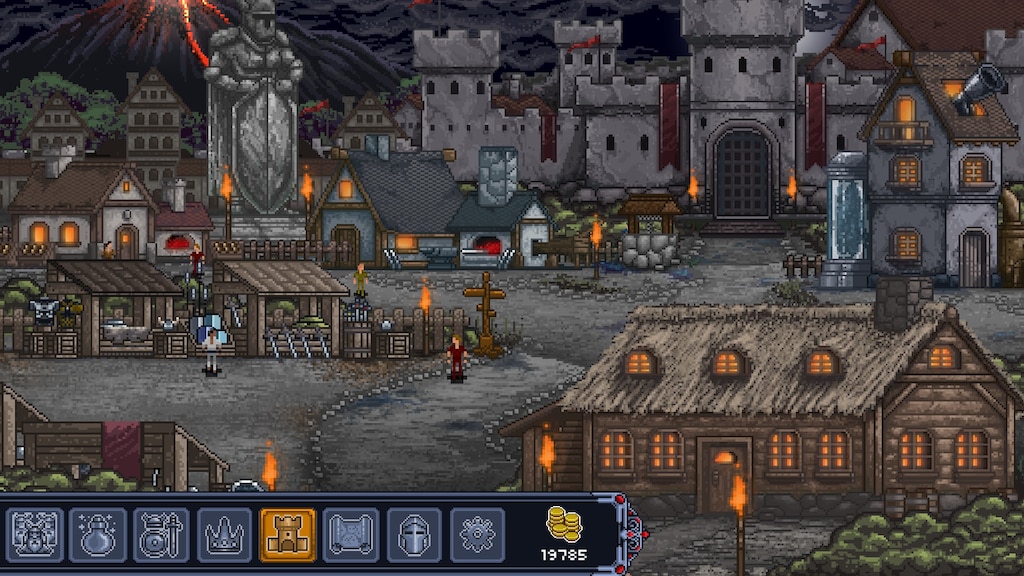 Levels consist of a dungeon with several runes: swords, potions, crosses, monsters, and gold runes, which encompass the “board” you occupy. You draw a path of connected runes of the same type to slowly move your way around the dungeon. Monsters have an area they exude that can be aggroed – after which they will chase you down a number of squares based on their stats, which is displayed when you touch the enemy. You wield a ranged weapon (a bow), a melee weapon (swords, axes, maces, etc), and up to three spells you can bring with you per level. Your attacks scale off of magic, attack, or both; you will need to collect runes throughout the dungeon to top yourself off and to fend off the creatures standing between you and the exit. Unlike Pokemon Mystery Dungeon, there aren’t floors to have to worry about, in fact, it is fairly easy to speed through levels without a problem sans lacking equipment due to a potential lack of treasure chests. The basic feedback loop is go to town, buy magic/equipment, upgrade items (similarly to a gacha game of collecting several copies of the same equipment), go to dungeons, rinse-repeat. Editor’s Note: Gacha games are a game where you put money in and get a random capsule that opens up to reveal a prize, you probably played them as kids and they’re very popular in Japan.

The primary replayability present in the game lies in the six challenges per level where you’re rewarded with a treasure chest after every two you complete. These chests will supply you with gold and equipment. There is an item rarity system, which harkens back to the looting system of RPGs and the like. The challenges help spice up the gameplay somewhat, often relying on you to deal with enemies with specific tactics, or leaning into more impressive puzzling feats. Some of these challenges, such as the multikill challenges or kills with special blocks can be especially annoying to set up, but the variety in gameplay helps break the monotony. Every eight levels or so, a boss appears which takes up about a ten by ten grid on the map. Bosses often use moves that alter the map itself as well. The bosses, in particular, drop fantastic loot, but I never felt like they challenged me past being a checkpoint of how much I’ve grinded.  At least the bosses begin to have more complex attack patterns after the first few encounters.  The developers updated the game to use either touchscreen controls in which you drag your fingers across runes to move or point at options, or the traditional analog control, these options are very welcoming to all players.

Darkest Hunters may not have left behind the most lasting impression on me, but I see it as a fun distraction from time to time. The core gameplay loop can be addicting and setting up a gigantic chain of blocks is always satisfying to some degree. I don’t think I can recommend this game to everyone, but I think it’s a nice game to consider for fans of Match-3 games and dungeon crawlers. I hope the developers consider adding more unique character classes that change up how the game is played. The heavy RPG elements from games such as Puzzle Quest implemented to some capacity would likely help endear me to this game even more.

Available on Nintendo Switch and Steam

A Switch review copy was provided by the developer