Fairly short review: Scrap is a level-based runner game akin to Super Mario Run and BitTrip: Runner. Unfortunately, quality-wise, this newer title compares rather unfavorably. The quick pacing and easy to pick up controls can help facilitate short time-killing playthroughs, though it’s easy to argue that online Flash games could do the same. Nevertheless, Scrap is an inoffensive game that can have its moments when you get that flawless run with perfectly timed jumps.

The controls could not be simpler, A to jump, B to descend. All the levels are designed with two floors you hop between. Obstacles include: delayed laser shots, electric traps, hovering mines, and completely blocked off sections. There are three worlds each with nine levels and a bonus level. Each level has three objectives ranging from never dying, to collecting a specified number of resources, to jumping x amount of times. It can be very frustrating playing through levels your first try, as more often than not, following a specific path will result with an instant dead-end restart without any chance to maneuver. This makes some levels resort to trial-and-error tactics that feel like they belong to a poorly designed puzzle game. 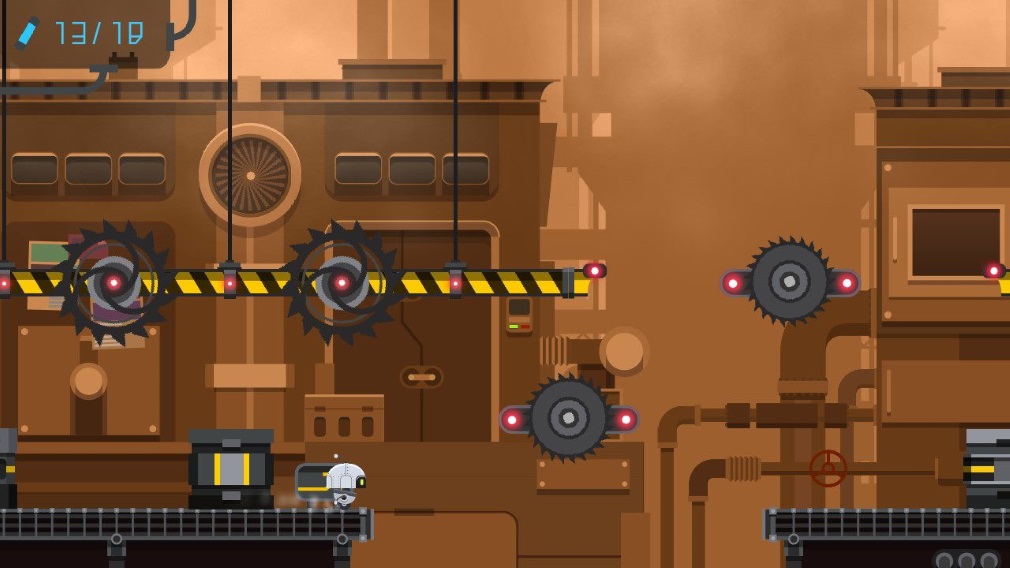 There were occasions where some paths were simply easier to clear, had collectibles, or a sign telegraphed what was ahead, but it makes experimentation a bit too punishing for my liking. It can feel like you are just being corralled around the level, instead of really having moments to quickly explore levels your way. Once you drill it into your head that the game is indeed not designed like Sonic the Hedgehog levels, with multiple viable paths per playthrough, I suppose that point becomes less relevant, but I think this frustration is still justifiable. The new mechanics added, such as power-ups that change your physics or movement, are introduced at a reasonable pace, and to be fair to the game, it makes predicting map layouts less completely random. There really isn’t much more to discuss content-wise, as replayability is fairly minimum and the story levels are all there is to review. Simplistic experiences aren’t always bad, but admittedly, it is difficult to expect the game to have a lasting impression on the player. It’s a game that’s moderately enjoyable for a day and then it’s done, which has made reviewing the game a bit difficult.

All that being said, I think because the game is built competently enough, I can still recommend Scrap as a niche sort of appetizer game at its best. Personally, I think it falls a bit under what I would give the seal, but mostly because the game doesn’t really have a wow factor to grasp onto. Gameplay can be engaging at times, but equally frustrating, and a game with this much volatility is difficult to wholeheartedly recommend. I think watching the trailer will be sufficient to judge your mileage on this one, though the price may be convincing enough to buy it.

Scrap was developed by Woodland Games.

A Switch review copy was provided by the developer.

Hellfirebam has not awarded Scrap The Indie Gamer Team Seal of Approval.