A little background before I introduce this one: it falls under the category of Battle Royale. Now, whether or not hearing that genre invariably casts a black mark on whatever property it touches is your prerogative, I will say that one of the jobs of the Indie Gamer brand is to highlight the small players in the indie scene, so here we are. Interestingly enough, despite being a shooter battle royale, Outworld Battlegrounds already differentiates itself by being a top-down shooter rather than the typical third-person shooter. And to the credit of the developers, there is a lot of design decisions curated to meet this change. Outworld Battlegrounds, in a nutshell, is the backyard scrapper: young, eager to please, inexperienced, and may need some love before it makes it to the big leagues. In my personal opinion, I think it would be a shame if this game never gets its shot, and becomes the next game eclipsed by Apex Legends or Fortnite. I’ll do my best to highlight the good I see in this title, while highlighting where the game is lacking. For a first time in my reviewing career, I’m likely going to revisit this game in six months or so, assuming the developers iterate quickly on the game. Fingers crossed that it’s not left for dead by then.

As stated, Outworld Battlegrounds is a top-down shooter that encompasses most of the traditional battle royale formula on a much smaller scale, as player counts are only in the low twenties, and matches last ten to fifteen minutes on average. It’s a title that knows what it is, and really focuses on facilitating a claustrophobic kill-or-be-killed atmosphere. One of the major ways it accomplishes this is through limited field-of-view and sound design. Unlike Fortnite or Apex, your vision is very limited, and when you’re exploring alone, the only thing you can hear is the sound of your footsteps. It’s a very harrowing and tense feeling that really ups the stakes in what would otherwise feel very anticlimactic and trite. As for sound design, mechanically, the game leans into a heavy stealth motif, with hiding in forests obscuring you from players’ visual field, but also creating the most bustling noise when traversing. Running enables you to quickly get to high-target areas to loot gear and give you a better lease at life, but all at the cost of drumming up a lot of noise. You constantly need to balance moving quickly and moving without a trace, and I love this aspect of the game. Speaking of moving quickly, the announcer will very loudly proclaim when the toxic field is on the move, which funnels players out of completely stagnant game plans. The map is a good way to quickly plot out where your next position will be, though I would personally like a stronger indicator of your location on the map. 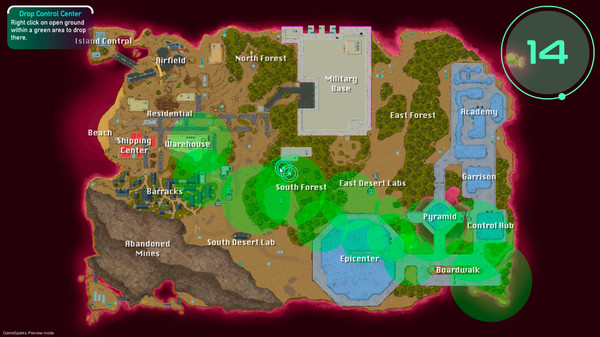 The game is still in its infancy, the weapon variety is relatively small compared to its neighboring games, with just a shotgun, bazooka, pea shooter, and a cone-shaped melee hitbox. I personally think this is fine, especially since it’s a game where you feel like you have a chance even with just your starting weapon of an energy sword, which, by the way, ONE-SHOTS anyone who doesn’t space themselves properly. Personal gripe here, but the fact that in most battle royales, it’s so easy to just run into a player who luckily got some quick pickups in the first stages of the match, rendering your chance to win the encounter to near-zero odds is not fun gameplay. But in this game, you can track the movement of bullets, are forced to lead shots, and box each other in. It’s a lot harder to just get the drop on a player and immediately obliterate them, and there’s no incredibly high-ranged sniper weapon that facilitates a camping meta-game. 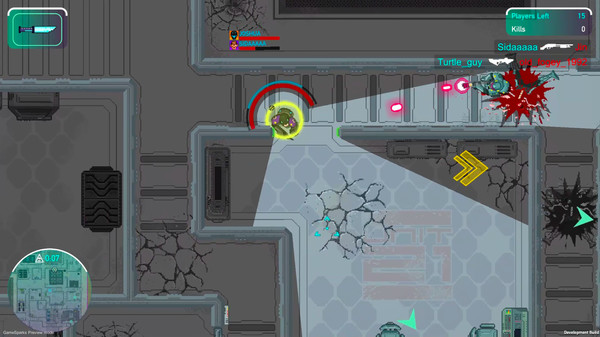 Now for the bad, some of the hit detection in the game can feel slightly off, particularly with larger bullets, which seem to have generous hitboxes. Might just be a matter that I shouldn’t be trying to barely move out of the way of shots, but the critique is valid nonetheless. The game just came out, so the player-base isn’t there yet, and the developers weren’t able to invest in servers, which means you are relying on Peer-to-Peer connections, so your mileage will widely vary. There were a few times on my end where the game would crash to desktop just before loading me into the match. I’m hoping that these are simply growing pains, and the developers will naturally work out a lot of these quirks soon.

In the end, Outworld Battlegrounds is a battle royale game that is very difficult to call pandering to the mainstream or cookie cutter. It’s amateurish and simplistic, but I think that’s part of the charm, as I was immediately reminiscent of my flash game days with Stick Arena. I think the price point is very approachable, but whether or not you’re willing to invest into the prospect of further support from HitGrab Game Labs is up to you. I wish the team the best of luck.