Some really beefy, heavy-hitting games have released in the past months: Borderlands 3, Monster Hunter: World Iceborne, Fire Emblem Three Houses, etc.  But we’re called INDIE Gamer Team for a reason, so instead for your reading pleasure, I present to you a game about helping a fox hunt a duck. It’s as simple as that, ladies, gentlemen, and everyone in-between. But, and here’s the crazy part, I’m gonna tell you why a project so simple can still wow you through its simple mechanics and well-paced level design. Catch a Duck is a lovely short-but-sweet filler game that crosses genres in a nice and tight package; the genres are: stealth, puzzler, and top-down action-adventure. It may not be the lofty sixty plus hour game of your dreams, however I listed a bunch of those sorts of titles at the beginning to tell you those still exist, but sometimes you just want to play something in between the big boys.

Catch a Duck presents itself with the all-familiar three star level menu, with bonus unlockable levels upon acquiring enough stars. Gameplay starts off simple enough and doesn’t overload the player with too many types of actions, but it slowly escalates the types of threats the player will need to play around. The reason I said this is a stealth-driven game is because the fox is not an apex predator: there are human hunters, bears, and bigger baddies to fend off as you go on the prowl for rabbits and that damned duck! Remember what I said about stars? They are scattered across very precarious sections of each level: it might be hiding right under the nose of a hungry carnivore, so tread carefully! 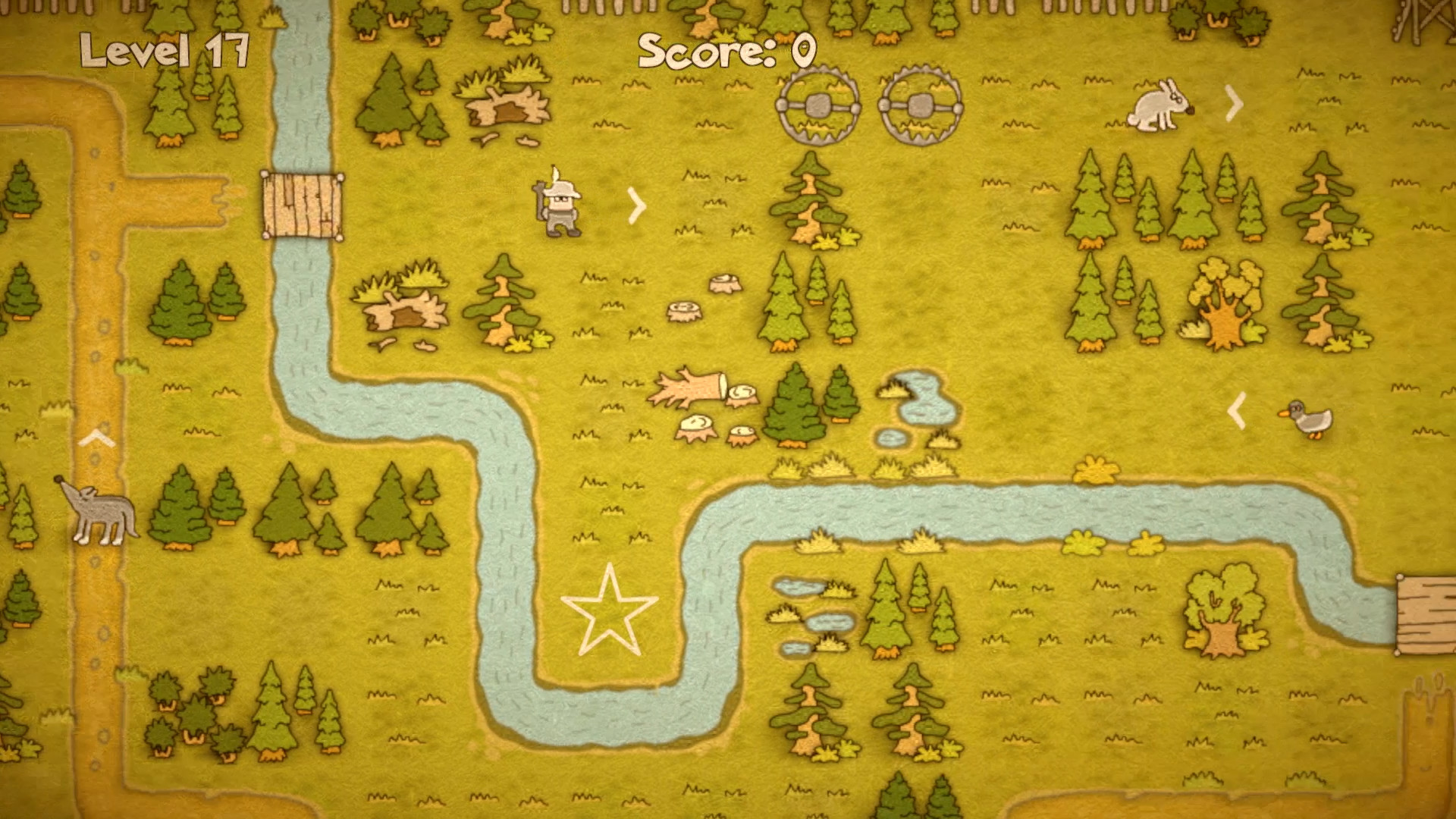 Controls are very intuitive with arrow keys used to move and space bar to teleport across burrows. Interestingly enough, the game designed movement so that you have to move in cardinal directions: you cannot move diagonally to speed up your escapes or outpace your prey. Admittedly, there may be some resistance to this at first, but once you realize that the game is designed around it, you start to play around it. The game demands you to keep a good eye out for your surroundings: there are tall grass areas that will hinder movement for both player and AI, hiding spots to reset the locations of enemies when they are alerted of your presence, traps you can use to your advantage to kill enemies, and more. The game also rewards you for understanding the AI behaviors of different NPCs, and nurtures some very bad ass moments for the player where you may barely juke out a hunter’s shot only for the bullet to friendly fire an obstacle in your way. This is a puzzle game, but there can also be a sense of improvisation to fix your mistakes that I love, and a nice delivery of tension and release. The game doesn’t take a pro-gamer to clear the levels without a completionist mentality, but some of those stars might take several tries to line up just right.

In terms of complaints, I have very few. The selfish, entitled gamer in me is hungry for more levels. I think this is one of the highest compliments one can give to a developer, the fact that you want to play more of their product. The artstyle and audio design may look cheap or amateurish to some, I personally found it charming and goofy. Occasionally, the NPCs might not draw aggro or react to you unless you get dangerously close, but I think most of these cases weren’t bugs or flukes. There are times and scores recorded for each level, but the existence of an online leaderboard might have been a nice incentive to care about proving my mastery of the game. Other than that, not much more negatives to discuss.

At the end of the day, Catch a Duck may not be a mind blowing game for the ages, but it’s certainly a great experience worthy of five dollars. Whether or not you find value in buying shorter games is your prerogative, but I see this game as a fun weekend excursion. Your mileage may vary in terms of how quickly you finish the game, but I think it’s just meaty enough to grab your attention throughout its run. I would love to see something like a Map Editor or Steam Workshop support down the line if you’re reading this, All Those Moments.

Catch a Duck was developed by All Those Moments.

Available for $4.99 on both PC and the Switch

Hellfirebam has awarded Catch a Duck The Indie Gamer Team Seal of Approval.