Marco is a ‘treasure hunter’, or in much more honest terms, a sticky-fingered thief. She was kidnapped by aliens and sold at auction only to be bought by an alligator thief, mob kingpin, or something like that. Since she was stolen as a lil’ kid, she doesn’t actually remember her family or even her home world. She does however have a picture of her as a child with her mother, but the picture is roasted, leaving her mom without a head, but only in the picture, promise. She’s informed of where her home planet is after she steals some weird lizard crystal thing. She’s supposed to give it to her ‘dad’, the mob guy, but chooses not to. Instead, she heads to Earth to look for her mom while running from her ‘dad’. Turns out more shit is going down and the Earth is in serious danger thanks to her existence; even more-so due to the crystal she has. It’s up to her and her newfound friends, who are all batshit crazy, to protect the planet, and more importantly their hometown.

There is only one single choice in the entire game, each choice gives you a different CG to unlock and changes some flavor text immediately following it, but the story doesn’t change in any real way. Also there’s a couple minigames later in the story that you can play or skip as you see fit. One is a timed fight where it’s effectively just clicking the mouse as soon as you can after a timer starts. Do it three times and bam, you’re done, or again you can skip it. The other is a spaceship shoot’em up where you just shoot the shit out of enemy spaceships, then get to the boss and shoot the shit out of that too, or, and I know this is crazy, you can skip it like I’ve said twice prior.

The story can (sadly, very, very sadly) be completed in under five hours without any real issue. I really wanted more to this, but at least it did have a proper ending. Though it has been left open slightly to maybe, hopefully get a second game, it’s not like it ends on a cliff-hanger or anything. It does however show there could be another game and I want one, badly. This is a comedy-heavy game, but it does have some sad parts to it and most of the ending is kinda bittersweet, but it gets happier.

There’s one other really unique thing about this VN, which is actually one of the things that really made me wanna try it. It has fully voiced and animated scenes in it. And I’m not talking about ‘oh their mouth moves a little’ or ‘they shimmy from side to side’. No. Fuck that. This is REAL animation. The game mostly is done in the standard anime-esque style that you find in VNs: basic, pretty, simple, normal stuff. Every now and then, though, it goes into animation and the style changes COMPLETELY. It goes from normal to this semi-chibi stylized format, something that kind of reminds me of the cartoon ‘The Amazing World of Gumball’ in an anime format while the action in the scenes gets a bit more stylized. It’s really interesting that they mixed this animation with the VN in general, but then to make it such a different style made it feel super unique. While the animation’s art style isn’t one I usually like, it really felt right with this. It was good because the entire game is based around this child and then this animation style just fits that childlike aesthetic because of the chibi-ness. Most of the game is in this fairly standard cute style in the VN, because after all you’re going to be looking at the same characters for a long time; they aren’t going to make them ugly. But then it turns on the animation every now and then, and it’s super cute. That’s what this chibi-like style does, it propels the cuteness into your eye holes. Anywhere else and I probably wouldn’t like this animation style, but it just fits too perfectly here.

Overall, Marco and the Galaxy Dragon is short but it’s really good. It has really cool animated segments, which isn’t normal for the genre, and I hope games like this continue to be made and it becomes normal for the genre cause it was super cool. The voice acting is ace and the art style is cute. I’m fairly happy with this game, the only issue I have is that it’s so short. I really want more to it and would have liked to explore the family concept a bit more, which is weird considering the game is kind of all about that, but it doesn’t really explore it as much as I thought it should have.

Marco and the Galaxy Dragon was developed by TOKYOTOON. 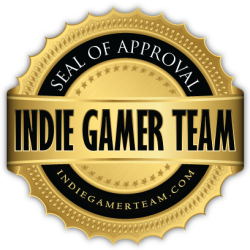 A review copy of the game was provided by the localization team/publisher ShiraVN.

darkmikasonfire awards Marco and the Galaxy Dragon the Indie Gamer Team Seal of Approval, a few times over with hopes this will convince them to make at least one sequel.