Painfully average… Not really much else to say about this one. It has an addictive arcade short bursts appeal, but I can’t see this one having any long lasting enjoyment. Jumping Joe is a vertical platformer that just relies on the left and right arrow keys to jump to the next platform above you ad nauseum. It’s a high score chaser with a few unlocks that kept me playing for a short while. There are 4 modes, and after unlocking one of them, I’d say it completely invalidates the other. There are different player characters to unlock that slightly change the stats and abilities available, but not enough to drastically mix gameplay up. There is an offline, multiplayer, split-screen mode that really adds little to the table. I’ll quickly explain a few more nuances, but this downer tone will not shift very much. Perhaps the casual audience will find interest in this title, Jumping Joe grabs you but does little to hold on.

You start off with a normal mode available, with other modes unlocked after reaching a sufficient score. Once hero mode is unlocked, normal mode may as well be replaced since hero mode is faster and more engaging. The difficulty curve marginally increases as fireballs, spikes, flying enemies, and crashing walls with increasing speeds threaten your runs. There are powerups along the way to pick up such as screen-clearing bombs, diamond currency for unlocks, magnets to pick up diamonds more efficiently, hats for more health, and rockets for a quick score boost. This pretty much sums up the rest of the game. 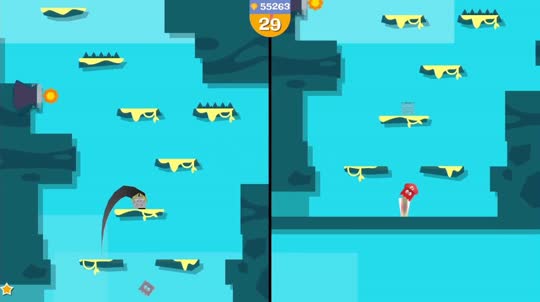 The exception is a race mode with zero obstacles, but a way to test your reflexes on how quickly you can react to incoming left or right platforms. I was strangely allured to this in a way that a few Mario Party minigames attracted me, but interest died quickly. There is very little else to discuss. Mechanically, with the exception of perhaps a few cheap enemy placements (completely randomized), and some slightly questionable hitboxes, the game plays well enough. There is just very little substance to be found, but what’s there can satisfy a short snack.

Jumping Joe and Friends was developed by Vixa Games.

Hellfirebam has not awarded Jumping Joe the Indie Gamer Team Seal of Approval.