Quick background: I was especially excited for this one from its coverage in the Devolver Digital video conferences. They showed just the right amount too that provided enough information to get you hooked without spoiling some of the insanity that comes in store. Don’t worry! I don’t plan on shattering your innocence in this review either, but I will say that gameplay is packed extra super duper tight in this one. There’s really no fanfare or padding – you just get the satisfaction of fucking shit up and organically exploring this Sci-Fi adventure universe. The inspirations from the Alien franchise are apparent, but I love seeing this angle from the perspective of the monster itself.

Flawless transition into the intro, Carrion is a reverse horror linear metroidvania where you play as a grotesque [EDITOR’S Note: you mean adorable] tentacle monster of biomass and viscera (insert hentai joke here). I knew this would be a power trip/fantasy game, but I was pleasantly surprised when I realized that you don’t simply start off as a godly entity with all your powers. There’s a buildup where you still start off as a force to be reckoned with, but the game slowly unveils more and more tools and methods of elegantly murdering the creepy facility human scientists. I don’t want to spoil the enemy types, but the game does a good job of giving you a chance to just wreck house without much forethought, while leading up to miniboss encounters where you meet enemies that don’t just fall to the same head-on, braindead approach. Besides the blatant dismemberment and devouring of those poor sad-sack humans, there are quite a few “puzzles” that will impede your progress through the facilities. I use quotations because some of them are your bog-standard “hit the lever to progress” two-step puzzles that barely require any lateral thinking. What I did appreciate is unlocking one of three potential sizes with their own abilities to match. Levels will even have pools where you can deposit biomass to adjust your size to approach the situation. In this way, the game provides a reason to think past the barbaric “me healthy large boy, me smash” mentality. Bigger isn’t always better, and I found myself actually capitalizing a lot on the smallest size to finish off encounters with pinpoint accuracy and deftness. Of course, this is inherently risky because your health pool is lower, but it compensates with abilities that make you slippery to hit. Consuming downed enemies is a good way to top off your health, and even grow your size on the fly! Outside of combat, later puzzles will require you to modulate your size in order to manage which abilities you have at your disposal.

Another thing to note that’s a bit of a double-edged sword: level rooms will never repopulate or reset. This makes you constantly feel like every action in a floor has purpose, but also the lack of a map of any sort may lead to some confusion. Fortunately, I never found myself softlocked out of a solution, so even if you think you are, trust me, you aren’t. Basically, there is a hub world that is spruced with level gates that provide a mini open-world layout. Areas are a bit like Metroid Fusion zones, but here you have to explore the area to find all the savepoints to unlock the exit door to the next area in the hub world. I honestly don’t want to give any more details regarding the play experience. The game is extremely brisk at about 4-6 hours, but I’m reminded a bit of the original Portal: a short game that cuts the fat, knows how to spend its time, and is incredibly memorable. Nevertheless, a large part of Portal’s success was the characterization and story elements, of which Carrion throws tiny bones here and there but yeah… 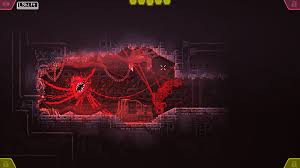 Carrion’s story is essentially just the player’s experience of growing stronger and the journey to transforming into the form you take by the end of the game. There are flashback sequences where you are whisked away to play as a human excavation team exploring the unknown environment. The flashbacks are essentially entirely puzzle-driven, where your character cannot jump and is mostly defenseless. These sections were a noticeable break from the frenetic gameplay as the Carrion monster, but I found very little point to them after experiencing them all. It all technically ties into the epilogue of the game, but I feel like I would have appreciated a fuller perspective via more lore. There is zero dialogue and exposition in the game, and while I respect the stylistic decision from a storytelling standpoint, it made these “story scenes” feel a bit hollow. On the other hand, I did appreciate how these portions of the game intuitively demonstrate to the player how to fully utilize a certain ability you unlock after completing them. That is a point I really have to give to Carrion: it does a great job in giving just enough information for the player to piece things together and teach themselves how to play. Shoutout to Arin Hanson’s Sequelitis series about Megaman X. The game respects the player and there’s zero handholding whatsoever.

By the end of my playthrough of Carrion, it felt bittersweet: I was sad that the game was over at a point where it finally felt like it was being fully realized. And yet, the final unlockable also felt like a good note to end on – the natural conclusion of an arc. Could said arc be developed more? Probably. I really hope that there is additional content or a sequel to flesh out (pun intended) this universe and its mechanics. I’m excited to see how the speedrunner community takes to this game – I can envision races ala Super Metroid runs being extremely entertaining to watch. I’m unaware of sequence breaking or tricks, but I’d be eager to find out. Admittedly, the price point may be a bit high for those players who are particular about their hours of enjoyment to expense ratio. But there’s definitely a quality over quantity factor. I’m really excited to see what the developers will have in store for the future.

A review copy was provided by the devs