I was excited when I noticed that Blightbound developer, Ronimo Games, also worked the Sword and Soldiers franchise, and particularly, Awesomenauts. I enjoy the unique art style and polish their games share. Awesomenauts had a tumultuous history towards the back end of its life (it’s basically all but dead), but I really enjoyed their take on the MOBA genre. Blightbound is a singularly online cooperative dungeon crawler with a focus on crafting and customization. I’m torn on how I feel about the game, because while I can see the shell of a great title, the variety in gameplay feels a bit lacking to me. There are three classes: assassin, warrior, and mage that dictates the party composition you MUST run every map. To some players this may feel stifling, but it helps maintain the balance of level design and control the general damage mitigation, healing, and damage output of any given party. As you enter dungeons, your units incur degrees of blight, which will eventually accumulate to the point of debilitating stats (attack power, speed, health, etc). The idea is that you either win encounters to minimize the blight, use potions to lower your levels, or switch to other characters to allow the inflicted to rest/heal. All of this on paper seems solid, but my issue is that while I currently control nine different characters, these player kits feel too homogenized to make each one feel complete. I have three of each class (remember there are ONLY three classes) and each individual has the same basic left-click and right-click action, with some differences to passive, two skills, and ultimate. There are a limited number of dungeons available at the moment, and most veteran players are grinding to be able to craft legendary items, or complete character-specific quest lines. This quest line system is a pretty novel idea, relatively speaking, that helps differentiate the otherwise blase statistical comparisons between characters of the same class. Overall, I think Blightbound is a bit expensive for the amount of content offered currently, but I’ll do my best to break it down to let you make your own decision. 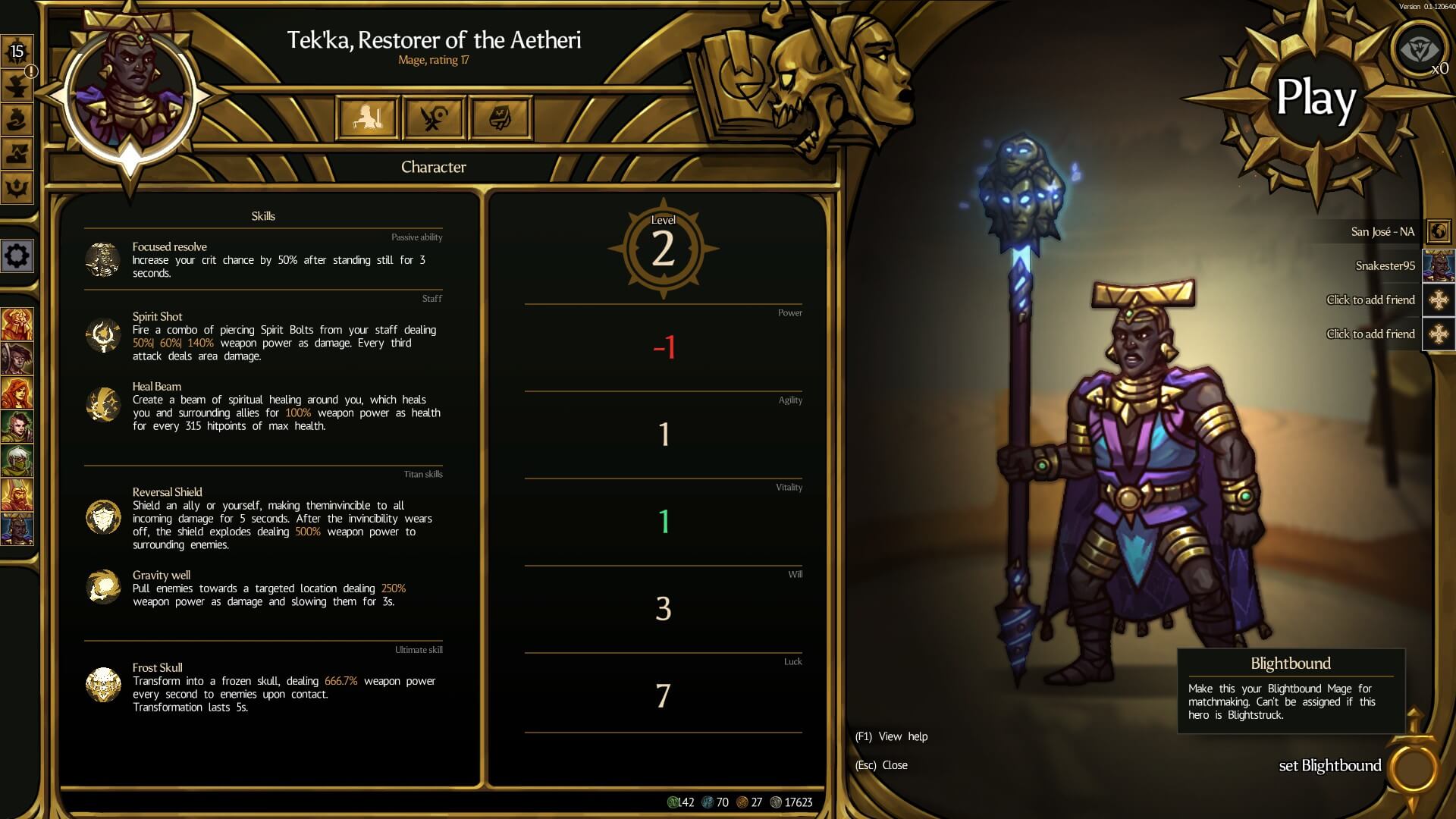 Starting off, you are placed into a basic loop of traversing dungeons, rescuing prisoners, increasing your prosperity to unlock new features in the main menu. Eventually, you will unlock the forge to craft new items, a merchant to buy new units/items, and the ability to queue with whichever character you wish. Starting off, you are forced into a “fill” role that will randomly slot you to complete a party. But as you unlock characters and prosperity, you can pick the character you want and queue into corresponding party members. A big thing to note is that you can either play this game with exactly three people in local co-op, or play online with randoms or friends with exactly three people. There are no AI partners to fill in the gaps, so it is impossible to solo dungeons, and you are at risk of disconnecting and losing out on all progress in a level upon a player leaving in the middle of play. There are some other quality of life fixes that I will bring up after discussing the core gameplay once you enter a dungeon. 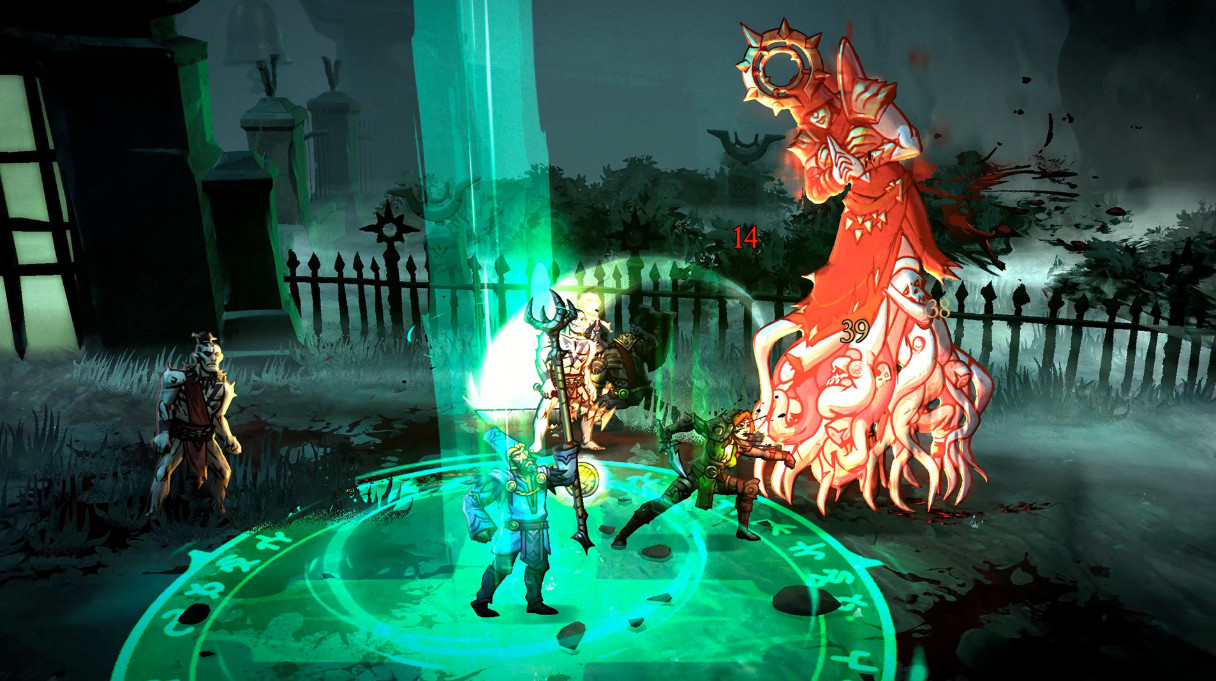 Level layouts are very much standardized, with very little variation aside from which minibosses you will encounter at any given time. There is some degree of open ended design with optional areas that provide mini rescue missions or loot. Other than the elevator and the red skull idol levels, it’s a pretty bog-standard “clear the room of enemies” to get to the dungeon boss. As you play in the same party and clear specially marked dungeons, you can build up notoriety. This will allow the party to chain special levels with beefed up difficulties and juicier rewards. While the layouts are still basically the same, the enemy placement and bosses do become mildly more nuanced and challenging. Grinding out high notoriety dungeons is paramount for crafting end game gear, and provides the most engaging gameplay experience. Unfortunately, unless you have friends to play with, it is very easy for parties to disband, resetting your notoriety bonus to zero, and making you start from square one. A reminder that you CANNOT solo dungeons, so you better hope players’ connections are immaculate AND they are willing to stick around.

All in all, Blightbound seems a tad too expensive for its degree of polish and sheer content. I think the developers could consider reducing the price until more of the game is released, at which point I can understand the price being worth every dollar. I think it’s a hard sell to convince your friends to buy into a game with so much more work to be done. I really like the direction of the game and the ways the developers play directly into the cooperative nature at hand. I think I would wait until doubling down though: I feel a little bad denying Blightbound the seal, but the standards for early access games have to be high. I hope Ronimo Games listens to the feedback, and rolls out some quality of life changes. A small laundry list I have: better ways to filter your inventory, the ability to swap characters even after queuing, perhaps more details on how to collect specific ingredients for crafting, and a slightly more responsive dodge button. I’m sure the more avid community members could contribute more heavily, but just some basic frustrations I had. Perhaps I will revisit Blightbound if it receives a massive update like more unique characters or new dungeons. 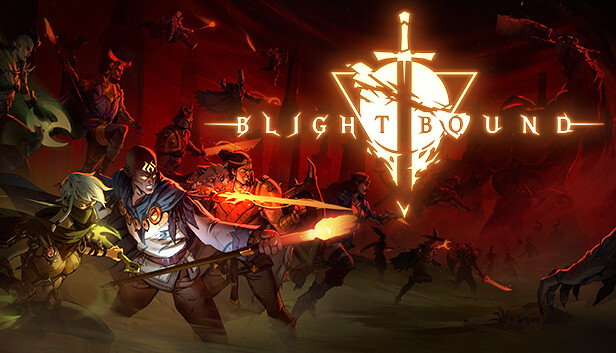 Blightbound is being developed by Ronimo Games.

A review copy was provided by the devs.

Hellfirebam has disappointingly not awarded Blightbound the Indie Gamer Seal of Approval.