I ended my review for Bear With Me Episode 1 by saying that it “…[hinted] at a great game to come….”. That was seven months ago. In that time I’ve cooled on just how adorable the art direction is. I even found that the initial hype I had to see where the story would go started to fade as other big name games came along. In fact, when a trailer dropped for this new episode I even said I wasn’t “… dropping to my knees in praise for the games return…”. So right out of the gate Episode 2 hits a few stumbling blocks: it as to reinvest me in the cast and the story, it has to continue the narrative, and it has to do both of these things so well that in another seven months I’m still willing to see what comes next in Episode 3. That would be a daunting task for any game.

And Exordium Games totally pulls it off. The game isn’t perfect but make no mistake – Episode 2 absolutely capitalizes on the potential shown in the first episode.

We return to the imaginative shoes of 10-year-old Amber Ashworth and her hard drinking detective teddy bear, Ted. The two have just arrived in Paper City, a sprawling metropolis located in Amber’s attic. Like I said, imaginative kid. The duo are still on the hunt for the murderer and arsonist known as The Red Man as well as Amber’s missing brother Flint. In classic noir fashion this brings Amber and Ted into contact with corrupt authority and dangerous criminals.

The game’s story does not veer far from established noir trappings, but it is much closer to The Big Lebowski than it is The Big Sleep. Bear With Me Episode 2 is fucking hilarious, and uses a good variety of comedic styles to achieve that. Witty wordplay, fourth-wall breaks, pop culture references, and just playing around with the absurdity of the situation. This all comes together as one of the best scripts I’ve experienced since probably The Last of Us WHICH IS WHERE THAT COMPARISON ENDS. Don’t be making any crossover fan art of these two games; I don’t need that in my life. While not all the jokes worked, I haven’t laughed this much since Portal or Portal 2. Not chuckles, full on “Dear god, I can’t breathe and my stomach is starting to hurt, please let this end!” laughter.

But just as important as how funny the game is, it also knows when to hit the breaks. When the game reaches its climax and we learn some important information, the game perfectly establishes the urgency of the situation. When all the pieces come together, you really do get the sense that everyone is in real danger.

AND THEN IT FUCKING ENDS.

I harped on this in my review for the last episode too, but I’m going to say it again here; Bear With Me just doesn’t work as an episodic adventure. If the team at Exordium Games sticks the landing, this could end up being one of my new favorite games, but the way the game is broken up just doesn’t feel satisfying. When I hit that climax I was talking about, I thought I was half way through the episode. Instead, I had to go back to one location, and then it was over. As this is one story instead of a series of stories building to a unified conclusion, breaking it up like this really hurts the game overall. It’s almost like taking a show like Stranger Things, Jessica Jones, or Breaking Bad, shows that work best when binged, and giving them Steven Universe‘s release schedule.

While I’m on the complain train, lets talk about gameplay. The main issue most people have with point and click games is how stupid the logic for their puzzles tend to be. So what does Bear With Me do? It uses understandable logic for it’s puzzles. So instead of spending hours trying to figure out that you need to put a cigar wrapper on your finger to make it look like you’re wearing a ring or that you’re supposed to let the goat knock you down, the items you have to use and steps you have to take all make sense. Because this alone would make the game too easy, Bear With Me puts more than a few items you need in odd spots. They’re often close enough to where they would make sense that you think you’ve checked them, but just far enough away to count as another interaction.

For an example, in one spot I needed food for a gorilla. Knowing how the games logic worked, I checked a nearby bowl of fruit, hoping for a banana. I had no luck. Enough time later to make me feel like a complete dumbass, I checked again, once more to no avail. But then I noticed the banana I was trying to get wasn’t actually in the bowl. I moved the pointer over just a little bit and…voila! I got the god damn banana. This was not the first time something like this happened. While this did drive me up the wall, it’s not even my biggest issue. No, that goes to the movement speed.

This is an incredibly slow game. To its credit, it’s not like you’re ever asked to do anything quickly, but holy hell it takes this kid a long ass time to get anywhere. In an early part of the game, I had to go from the inside of a diner to a character’s work space to grab an item, four screens in all. That alone took two loading screens and nearly a minute of Amber and Ted just casually strolling across my monitor. Then I had to go back almost the entire way to grab another item, only to return to the work space a second time. And you guessed it, another two loading screens and our heroes moved with all the urgency of a quadriplegic stoner after seeing a DEA agent in Colorado. (Editor’s Note: We can neither confirm nor deny if this ever happened to Will.)

All of that said, I still love Bear With Me so far. The story, while seemingly predictable, is incredibly well told. It does everything it can to make the most out of it’s core idea of this all being a young girl’s play session and imagination. It may not be worth getting piecemeal, but once all the episodes are out I very much recommend binging them in one sitting; at least, I do right now. It is still possible for this to go the way of The Hobbit trilogy and just not be worth it in the end. But for now the question is: do I think Bear With Me will ultimately be worth your time? The answer? DOES A BEAR SHIT IN THE WOODS? What have I been talking about this entire review? I fully expect this to have a place on my “best of” list come December. If you disagree, then frankly my bear, I don’t give a damn. 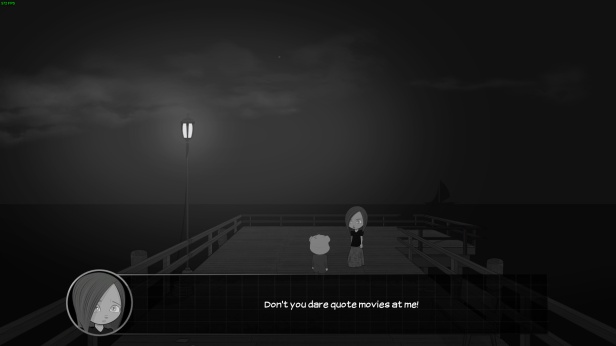 Bear With Me was developed by Exordium Games

$9.98 for Episodes one and two; it’s like a bear hug for your wallet! A big, drunken bear hug, but still!

William Shelton has awarded Bear With Me Episode Two the Indie Gamer Team Seal of Approval.

2 thoughts on “Bear With Me Episode 2”