While this introduction may seem like going off on a tangent, I assure you that I have a point to make.  One thing you may not know about me is that I am quite the avid board-gamer.  There is a particular genre that I tend to avoid with few exceptions known as dexterity games.  Now there are a few that everyone is familiar with (at least by my personal definition) being the party-boat/barroom games such as Darts, Pool, and Shuffleboard.  Dexterity games lean towards the physical skill demanded, and less on strategy or planning.  Video games have recently began to follow this trend: the most recent game I played being Getting Over It, a brutally frustrating dexterity based game that streamers loved to hate.  Godly Corp follows this pack, but I would say strikes a decent balance between being completely alien (or should I say Cthulhu?) to me, yet surprisingly effective at teaching its controls over the course of the game.  This is coming from a player who is less keen on playing the “Purposely shitty controls” games: Godly Corp is difficult, but fair relative to its brethren.

The premise of the game is simple: you are an elder god entity with a controllable tentacle starting your first office job internship.  There’s a shocking amount of lore I don’t want to spoil that provides an opportunity for worldbuilding, but at the end of the day, the storytelling in this game is purely farcical and comedic.  You are introduced and carried through the game by a female disemboweled narration that honestly was uncannily similar to GlaDOS from the Portal series.  Nonetheless, the writing is sharp, and the developers do a good job creating a fun dry-wit dark comedy experience.  There are allusions to apocalyptic events and the like, yet you never feel like you’re there to witness it firsthand as you’re busy with botany or package delivery.  The comedy really hit for me is what I’m saying, and helps break up the monotony of wrestling with the controls, and figuring out the tasks at hand. 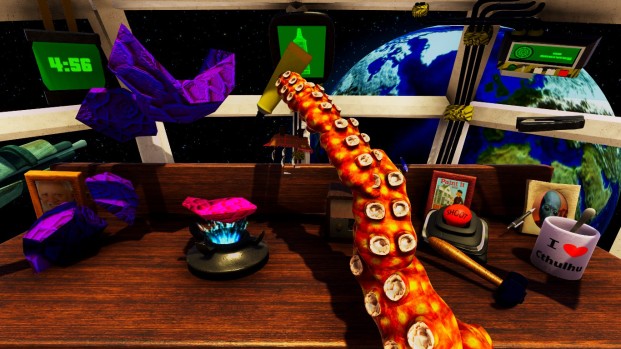 As for the gameplay, the controls span moving the mouse to control the x-axis, using the mouse scroll for z-axis movement, and LMB and RMB according to the given level’s instructions.  I think a big reason why I enjoyed this dexterity based game more than most was how tight the level design is around a relatively streamlined moveset.  Don’t get me wrong: the controls are still very esoteric at the start of the game, but as you keep going, you will find yourself proud of the progress you have made along your journey throughout your miserable desk job (plus side, the pay seems pretty decent for entry-level).  The game splits its attention between multitasking and mastery of the wonky physics-based controls: the multitasking aspect lends itself to some especially hectic moments that really drive the addictive nature of the game.  Levels are short, bottoming out at around 6 min tops.

There are 15 levels total, but with promises of an endless mode, I think you get more than enough for what you paid for.   The variety within the gameplay is pretty good: I’d say it starts off great, but slowly just becomes final exam compilations of all the tasks you had done prior.  One of my favorite levels juxtaposes the soothing nature of watering a spherical plant with the frenetic action of gunning down the robot bureaucracy that just really want to incorporate KILL you.  The game really keeps you on your toes, and the timer just enough to keep the pressure on without making the game impossible. 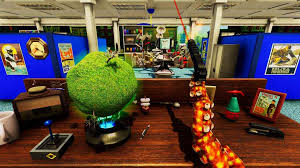 Godly Corp was such a pleasant surprise for me: it’s utterly charming and strangely zen at times (I would likely attribute that to the psychedelic electronic soundtrack).  I think those of you readers who relish those wacky games like Surgeon Simulator (or PLACEHOLDER Simulator real talk), this game is right up your alley and is an easy recommendation).  For those of you who might be on the fence about this one, I am happy to report that this is one of those games that joins Octodad for having an awkward skill floor, but reasonable enough learning curve to keep you engaged. 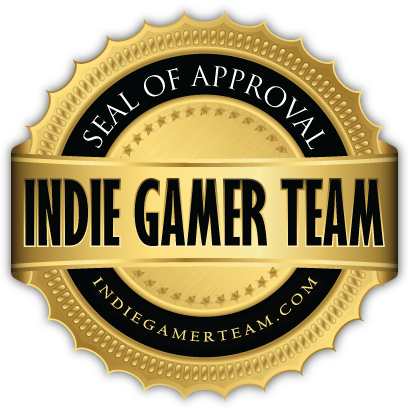