TSIOQUE is a super cute hand drawn point and click game. You play as child Princess Tsioque. Her kingdom has fallen, her mother has taken the knights of the land and gone off to fight with a monster to protect the realm. Tsioque’s father went missing soon after and no one knows or even questioned where he disappeared off to (Editor’s Note: This seemed like an odd story beat at first, but then I thought about one or two world leaders I wouldn’t mind disappearing at random, so I stopped questioning it). To top off this broken family that stands atop this broken kingdom, a dark wizard has now claimed the castle with both her parents gone. He and his summoned Imp minions have locked the castle and locked Tsioque up in the dungeons. The wizard needs time and quiet to complete some ritual. What it does… who knows, but it’s up to you to break his concentration and stop him at all costs, cause you know, fuck dark wizards. The only wizard we need is Gandalf anyways. 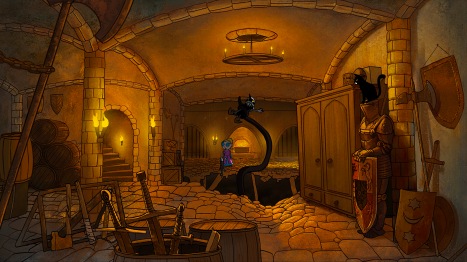 The entire game is hand drawn and while I wouldn’t call it beautiful it is instead really really cute. It’s just goddamn adorable. There’s a mixture of detail work in this some things are highly detailed, other things are kept super simplistic. This provides an interesting look that helps the cute aesthetic even though the game is a dark foreboding place it still seems cute. The main character Tsioque is super adorable herself too. She has these GIANT fucking blue eyes, which you often see on kids to show youth and kindness and the like, but always has this pissed off look on her face which made me laugh fairly regularly.

There’s occasional voice acting in the game, most if is garbled ‘imp’ speak which his still understandable but it doesn’t sound right. Most of the sounds in the game though are exactly that sounds not voices. Either sounds of Tsioque putting effort into things or imps milling about or things of that nature, Tsioque herself never speaks. The Wizard does though albeit not often. However, when he dies speaks he sounds very loud and angry. Granted he has a right to be upset I guess he wants quiet and Tsioque seems to have decided the concept of quiet is heinous so she makes noise constantly. There’s also the fact that she, a child, is outsmarting him and his henchmen, making them all look like fools. 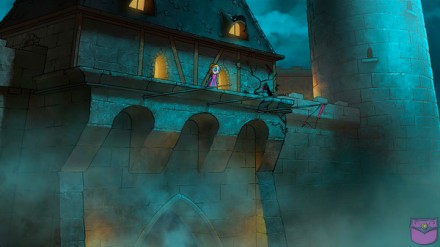 The only drawback I had for the game was that some of the early and mid-game puzzles were hard to figure out. One was stupidly complicated and the others just aren’t obvious. Thankfully as the game comes to an end the puzzles get easier. Sadly though it gets easier not because you understand the mechanics any better but instead it’s just cause they’re easier puzzles. There’s no hint system which I think is needed and should have been implemented as otherwise this requires a walkthrough occasionally cause some of the puzzles you’re probably not going to figure out on your own. It’s a shame because I think this will cause people to give up on an otherwise really good really cute game. The worst puzzle of the game was the one mentioned above; you had to shoo a bird between two flagpoles about a dozen times to make a cat that was sitting there the whole time, attack the bird. But the cat doesn’t move anything but it’s head to watch the bird, from the first to the last time you click to shoo the bird, only when you’ve done it enough times does the cat hop down. After shooing it a few times naturally people would likely give up on that as having anything to do with the puzzle. Had the cat moved or something; gave any notion that it was getting more and more ready to attack the bird it would have been fine, but it never did. This was the only case of that happening but that’s around the mid-point of the game and that could stump someone or make them just straight up quit the game. It’s just a really poorly designed puzzle.

Now I might gripe at the puzzles but it’s too goddamn cute to say no to. It can be completed in under two hours, but chances are it’ll take around three or four hours to beat, maybe even longer if you don’t use a walkthrough when stuck. Honestly I suggest a walkthrough being up while playing this, cause if you don’t get the puzzle within a few minutes, you’re probably not going to. Near the end of the game it gets really “what the fuck”-y but it does explain it, and that ending just makes the game sooooooooo much cuter. After the game you need to watch the credits, you get to see the game from the Wizard’s point of view which is really funny and rather cute.

UPDATE 18-12-29: I obtain information from the Dev himself, and he stated there actually ARE hints in the game, that being said there’s no hint system. In a few areas especially near the start of the game; if you can’t figure something out after a period of time the item you need to interact with will glow a bit. That being said it doesn’t tell you how to interact with any item, also it’s only in specific areas, I’m not even sure which areas myself. As such not every puzzle you have trouble with will have a hint. You can’t manually activate it or deactivate these hints either so if you miss it glowing you’ll just have to keep waiting I guess.

A review copy was provided by the developer Oh Noo Studio.