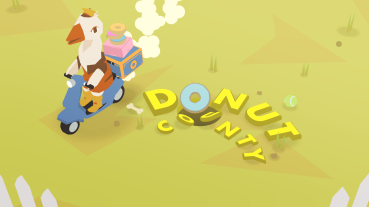 Donut County is a super laid back game; it’s kind of a puzzle game I guess. You play as a moving hole controlled by a trash panda, otherwise referred to as a raccoon, named BK. The more trash you suck up the larger the hole becomes to suck up even larger objects, so it’s a puzzle because you have to figure out how to suck everything up and in what order, but it’s not hard. This is a super chill just waste some time or cool off type game. Something the whole family can enjoy.

Now BK’s job is to suck up trash with the hole. The problem with BK is, that he’s a selfish prick and he sees everything as trash because he’s… well he’s not exactly smart. BK works at a donut shop, and when people order donuts from the shop; he sends out his hole to suck up their trash. This usually involves sucking up everything they own, their house, and even the customers themselves. Granted none of them know this is going to happen as such in the span of a like just over a week the raccoons have set up shop at this donut place and BK has managed to suck up the ENTIRE FUCKING TOWN, including his own stupid ass.

The game is straight forward so I have little to say about it, it’s just there to be chill, take as long as you want to complete levels, there’s no timer or score or anything. BK however is working towards a level up in his trash pandaness which is given to him by his job, so you see a score at the end of the level that ranks him up from 9 towards 10, but nothing you do affects the numbers they’re scripted. There are no penalties in the game either.

Between levels there is story content which explains the following level all of these cutscenes are really humorous. I enjoyed them heavily they’re goofy as hell. It involves the town telling BK how he fucked up and him trying to turn it around to explain how great he is because he’s a selfish prick. It’s fucking hilarious. Eventually like every good story, he pulls his head out of his ass… a little anyways. He helps the people in the town get from the underground where they’ve fallen, thanks to BK, back to the surface.

I have to say the game is fairly short about 3 hours long, but oh my fucking god is it funny. However it isn’t one to play all at once because it does become tedious since the game-play is so simple. You make things fall into the hole so it can get bigger to make larger things fall into the whole. While fun, doing it over and over and over for 3 hours, it’s… not exactly fun enough to do that. I say play a couple levels at a time and you’ll love the hell out of this game. You can even play it with your kids or get it for them, it does teach a good lesson of treating others well, apologizing for your mistakes, and seeing things from others point of view. That being said BK is still always BK, yeah he learns a lesson but he’s still all sorts of a douche. He’s not a bad douche unless you’re someone he’s fucked over. Otherwise he’s actually rather funny in his own dick-headed way. 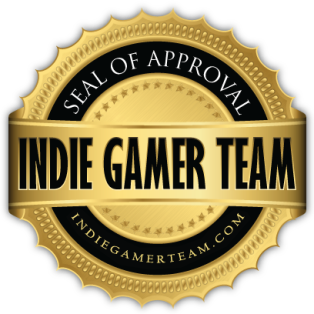 A review copy was provided as a gift from a 3rd party.