Like I promised – another Switch review: this time completely different genre. I only recently got into the top-down, isometric, shooter genre. Closest thing I’ve played are shmups, which I think have diverged sufficiently to be classified on their own. The really gripping ones from the last decade have been The Binding of Isaac, Hotline Miami, and Enter the Gungeon. Hellmut: The Badass from Hell is a newcomer to throw its hat into the ring, and, while it may not be the most refined experience, there is a good amount of frenetic, challenging fun to be had.

Hellmut is a top-down shooter with rogue-like structuring. The levels are randomly generated, and whenever all your characters die, you start again. Fortunately most “runs” won’t take more than a half hour or so. Hellmut takes place in a wacky world of abominations, cybernetically-enhanced werewolves, demons, and other otherworldly spawn. You start off with a meek eyeball monster on every run, along with another mutation form you can switch between. Whenever you complete a run, you unlock new characters and weapons to start off with. Characters have their own special attack, gun, movement speed, and health. Character movement and shooting is pretty responsive and the general experience is very easy to pick up and play. While this may hurt the longevity of the game with its lack of complexity, sometimes it’s nice to have a game that’s mindlessly fun. The werewolf is an average speed character with a bazooka that bounces off of walls, while the giant abomination is a tanky, slower character, with a lot of health, and good damage.  I would definitely recommend the abomination when starting off, from my experience, he seems to be one of the best characters in the entire game.  The castle dungeon hall you ascend each game will always have a boss every three floors with shops and the beholder event.

Shops will allow you to purchase armor and other stat enhancements, weapons, healing, and other consumables etc. Floors are pretty simple: you do not need to destroy all enemies except for in the final room of the floor, also enemies will chase you down. One issue that takes a bit of getting used is how quick and jerky enemies can be. Combine that with the fact that enemies generally spawn all around you, and I find it very easy to get cornered and get hit with a lot of cheap shots. After a while, you get used to enemy patterns, and the game becomes more reasonable. What really helps are the beholder events. They allow you to take on a gauntlet challenge of killing 50 or so enemies to receive a reward. What you get is very handy, it’s essentially new characters baked into extra lives. Remember, you only lose if the eyeball monster dies, so the more characters, the merrier. 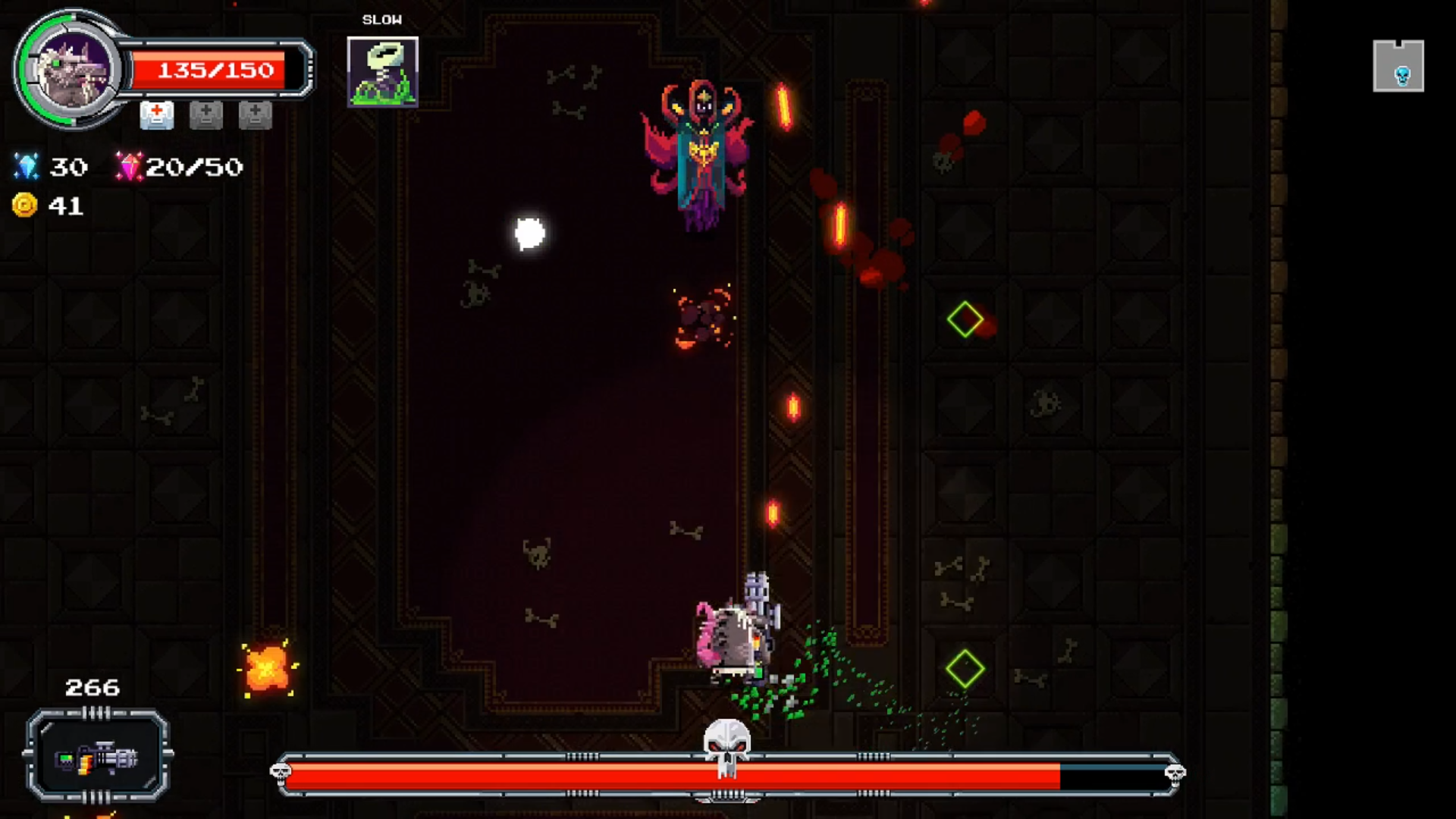 There is another game mode bundled with Hellmut, a one to two player horde mode. I’m a bit surprised that the main single player mode does not include a co-op mode, but perhaps it wasn’t able to be balanced accordingly. Anyways, the horde mode places you in a room defending a monster incubator. During each wave, portals will open up at different corners of the room, and it’s your job to keep the incubator away from enemies, and destroy the portals. It’s a pretty straightforward affair. I found the difficulty curve to be more leveled, although with some lucky portal spawns, some waves are a breeze.

Overall, I cannot say I would recommend Hellmut over Enter the Gungeon or Binding of Isaac. However, in a vacuum, I think if you want to try a game that’s a bit more chaotic and perhaps you were a fan of the old Gauntlet games, I think that arcade game itch can be satisfied. Not a strong vow for the seal, but I think Hellmut shows promise, especially for less veteran Switch owners.

Hellmut The Badass From Hell was developed by Volcani.cc

A Switch review copy was provided by the developer.

Hellfirebam has awarded Hellmut: The Badass from Hell The Indie Gamer Team Seal of Approval.