Point-and-click adventure games are one of those games that some industry vets like to say are relics of the past. You have games that come out in recent years, like Thimbleweed Park and, though this might be a bit of a stretch, Return of the Obra Dinn, that really capture that spark from the last decades. Whether it be Monkey Island, Double Fine games, or King’s Quest, these titles felt like the developers were delivering a digitized standup comedy routine/radio drama with that sweet interactivity icing on top. They felt intimate. Players felt like they were being winked at with cheeky dialogue, and the games were fun and engaging.

Despite the many games in this genre, I personally haven’t known many that maintained a darker tone consistently throughout the experience. That’s where we get to today’s game at center stage, Unlucky Seven. Phew, you still with me? Unlucky Seven manages to capture a Tim Burton-esque macabre atmosphere through and through, and it creates a compelling world with a great air of mystery. The sound design and visual style of the game are utterly captivating to me. I haven’t seen many games quite like it, and it hooked me. Sad to say, as I continued to play, that initial high that I experienced faded to the point that I wasn’t sure how to feel about this review. I’ll do my best to break down this roller coaster of a game, and give you the details to make an informed decision yourself.

Unlucky Seven is a point-and-click adventure game that presents a horrific, future-punk narrative via several different VHS tapes being played with THAT 80’s-90’s film grain, you’ll know it when you see it. Another thing of note is that the dev team, Puzzling Dream, are based in Poland, so some of the dialogue may be a touch awkward to native English speakers. I won’t divulge too much of the story, but let’s just say the game has quite a few anthropomorphic animals (yeah, yeah cry at me that this game is furry bait). I’m honestly completely ambivalent when it comes to that sort of thing, but I was appreciative the game allows you to pick key characters moving forward as they are introduced to be either animal or human. It’s a nice touch to appeal to both audiences. Back to the introduction, you get dropped into scenes with different characters, there’s seven in total, thus UNLUCKY SEVEN. It’s an almost anthology movie Pulp Fiction style game, as the game slowly ties its seemingly independent plot threads together by the end. You will be introduced to some pretty fucked up things, including organ harvesting, human mutilation, gross-out moments, murder, etc. The graphics are purposely this retro, pseudo-PS1 era style, so it won’t be as visceral as you might think, but the game can still shock. This is definitely not a jaunty, happy-go-lucky adventure, as there are comedic elements, but tightly packed into a psychological thriller package.

Getting more into the gameplay, it’s pretty bog-standard for a point-and-click. The game will point out elements in the background to interact with, and you move to those points to collect hints, pieces of lore, and items for your inventory. The puzzles aren’t as esoteric as some point-and-clicks, but your mileage may vary on that road. I personally thought it was reasonable with frustration points scattered intermittently, though not enough to slow you down for too long. One annoying thing is that saving in this game doesn’t make much sense to me. From my understanding, you only reload at interspersed parts of an episode, meaning you never know when it’s safe to quit. I cannot fathom why you can’t easily quicksave your progress or liberally create save points. Movement can feel like the tank controls from the old school Resident Evil games, which can get clunky and slow, especially when moving around tight areas. The game doesn’t commit, in my mind, to full-on campy or being completely straitlaced, so the fact that there’s no consistent tone can be a little weird when it comes to interpreting some scenes. I suppose it might be asking a lot to expect Tarantino levels of writing from an indie studio, but it serves its purpose. 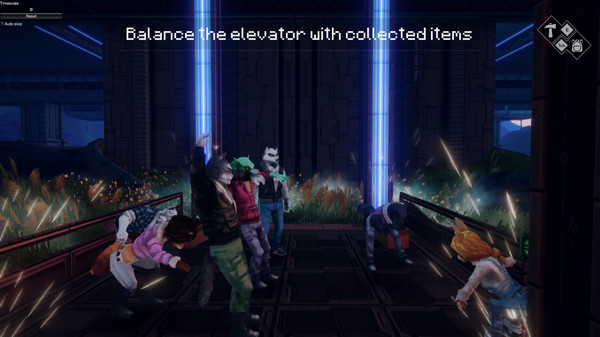 Ultimately, Unlucky Seven feels like a game that might need a little more time in the cooker. I realize the game only recently released out of Early Access, but I have no idea if there are plans for updates anytime soon. If I knew, I’d say you should wait until then, but I think watching a gameplay video of the first episode or so will help you make your decision. There are elements of a great atmospheric game, but the writing quality is a bit all over the place at times. I think it can still be a good time, and eleven dollars seems like a decent price, though I’m not sure if it will ever go on sale to sweeten the deal. I hope the developers take feedback from its audience and continues to carve a niche in today’s gaming landscape.