Leprechaun Shadow is a mixed genre game, going between absurdist, noir, comedy, point and click, to old style RPG. It’s also the third game in this series which all focus on the main character, Sir Typhil, and his journey through knighthood. In case you haven’t figured it out somehow, you play as Sir Typhil. He has obtained a unicorn by the King’s demand and is trying to get it back to the King. You’re come to a city to stay at for the night, but low behold, you have no money and you need to gather some so you can get a boat off this island to continue to the King. Well, along the way you get roped into solving a string of serial killings that the local police have decided you’ve been committing even though you’ve only just arrived in the city, oh yeah, and you’re fucking unicorn was stolen, *sighs* now you gotta find that fucking thing again too. 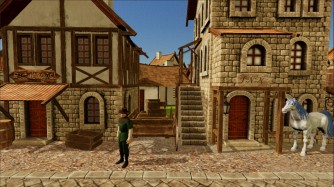 Well story-wise… what’s listed above is pretty much the whole story. The comedy in the game is rather funny and at times crude toilet humor, which I rather enjoy. The whole game is voice acted too, even down to the unicorn’s neighing noises, and they’re all fairly good, on occasion, though, some of the characters suddenly seemed to lose some of the emotion they normally have in their lines. Fighting in the RPG style is kinda fun in some aspects, but there were numerous drawbacks with it though.

Now onto the bad, and before your jaw drops with how quickly I’ve moved on, I put almost nine hours into this game and four or five of that was spent in just ONE area trying to figure out what I needed to do before I eventually fucking gave up. So I’m not sure HOW far into the game I actually got. I’d like to think I got at least one-third of the way through it but… who fucking knows. So again, onto the bad… Okay, the game is absurd, while I like that in comedy, I don’t like that in game-play mechanics. The point and click in this game harkens back to the goofy, illogical shit of games like Monkey Island, and other old point and clicks like it, where you do shit that simply doesn’t make any fucking sense. I HATE that, absolutely fucking can’t stand it. And that kinda killed the mood for the point and click, however I could have gotten past that. I was troopering through that shit. I was going to see the shiny golden shit ending of this game. I was going to fucking do it, cause I wanted to see what goofy shit was said and done in the game. That didn’t happen, which is wholly the fault of the next issue in the game, the RPG mechanics.

After you get out of the city and are able to explore the surrounding forest it turns into old style RPG, you walk across the forest map and get into randomized, turn-based fights. Great, that’s cool, I like that shit and I can appreciate it. However, the map doesn’t have… ummm… well, a map. You’re walking around the forest but you don’t know where you’re going, and that’s a problem cause this bitch is HUGE. I couldn’t find anything and I spent hours in this fucking place. I never figured out how to get to anywhere else in this section, and this is where I gave the fuck up. A minimap that showed the whole area, or even a map in the inventory that would show the whole area and your location and any place you found that was important, like camps, kingdoms, and the like would have made figuring out this place without just being lost constantly a lot easier. Another issue which is a big nit-picky, is the RPG stuff doesn’t give you any numbers. You level up, and it doesn’t tell you what level you are, how much XP you’re getting from a fight, how much you need, how much you have, fucking nothing. It doesn’t even tell you that you’ve leveled the fuck up. What it does do is tell you when you gain new abilities, and when you level up you, I believe, heal the whole party up to max health, and the max health for whoever leveled will have gone up. I like being told things so I know what I’m doing and how to do it better. Like, I don’t know if the level up mechanic here is based on beating X amount of fights, or if each monster is worth different XP, old RPGs have had both systems. I don’t know if I’m farming XP or battles, cause if it’s just battles you could do it against low level things to get to max level, cause X amount of fights is X amount of fights. If level is based on XP then low level enemies might not give you shit as you level up more. I have no idea, the game wouldn’t fucking tell me anything. Oh, and one more issue that’s super duper nit-picky, the enemies, when you kill them, don’t get removed from the attack screen, their name goes from whatever they are to –KO–, however, when you go to attack, you have to tap past that to get to the next thing to attack, EVERY FUCKING TIME. I’d rather it just auto-ignore the dead things, OR remove it from the attack screen entirely since it’s dead and you can’t fucking attack it anymore.

Then there’s one last set of issues that are semi-related. The first is that the game has no hint system, and with how absurd some of this shit is, that would be useful. Another is that it has no journal or anything, something like that which would put all the things you need to do so you can remember it in there all the important info, etc, and get marked out after you do what you’re supposed to with it, would be useful. Like in many games these days, there’s a quest journal that tells you all the steps you’ve completed of the quest, and gives you updated parts when you’ve completed the previous part. Something like that would be useful, cause I got information that I still barely remember, but I don’t know who told me it, and I can’t get that information out of any of the NPCs anymore, so I’m not completely sure what the fuck to do.

If these issues were fixed, I’d really like the game, cause I like the dialogue and the story was funny up to the point I got. However, the issues stopped me dead in my tracks numerous times for long periods of time, then the last time it stopped me dead. I was stuck for around half the fucking time I played the game in total. It made me give up cause I couldn’t figure out what to do anymore, and that ruined it for me. I wanted to see more of the game but I couldn’t figure anything out. Hopefully, someone figures the damn thing out and puts up a walkthrough then I’ll go back to it and finally get to see the rest of the story.

Leprechaun Shadow was developed by Stand Off Software.

A review copy of the game was provided by Vance Baryn, the developer.

darkmikasonfire does not award Leprechaun Shadow The Indie Gamer Team Seal of Approval.