Before we get into the review proper, I must warn you that it deals with harsh, heavy topics that can negatively affect some of you. It’s a warning that I cannot dispel because, while Shadows and Dust is an experience that I am glad I had, it’s not for everyone. Depression, suicide, and grief are topics that show up and, though it is short, they are dealt with in such a way that they can’t be avoided. I’d go as far as to say that they’re the whole point of the game.

Before I even approach and play a game on Indie Gamer Team, I like to try and guess how the experience will be. This is not something that I am very good at. While I can always look at the screenshots provided on the Steam (or whatever store) page to try and gauge the visuals, and while a games’ genre fills me with expectations of what it will play like. There are times where the experience is so significantly different from what I imagined, and I’m blown away, in more ways than one.

Going into Super Tennis Blast, I had a pretty good idea of what I would get, it’s a tennis game. All the while, while I was playing Cuboid Keeper, I was surprised by a deep story. I bring that up because, while I expected something from Shadows and Dust, what I got was something else. As someone who played the previous game from the developer, I thought I knew what I was getting into. I was prepared for sharp wit and cynical humor, but what I got…well what I got was less a game and more of an experience.

I played the game to completion twice, and after playing it twice (something that took about 45 minutes), I just had to mute Discord and Skype, minimise Facebook Messenger, close down my music, and get away from the computer for a bit. Beating Shadows and Dust is not something particularly hard to do, or comparable to even the shortest of platformers in length, but it stuck with me. When I finished it, I found myself staring at a wall and suppressing sobs. It had hit hard.

That is the single most genuine compliment I can give the game. It’s often said that, worse than being considered bad, art should never be considered forgettable. The job of the artist is to make an impact, to make the one enjoying it feel something. If that’s the case, never has a video game done so much to convince me that the whole medium is art. I didn’t exactly need convincing of it, because I eat, breathe, and dream video games, but it was there all the same.

Shadows and Dust managed to do, with a limited scope and cheaply textured items, what games which aim for photo-realism and cost millions don’t. I know it feels like I’m throwing heaps of high praise to the game, but when people list games that moved them, the usual suspects show up, but I think I now have one more to add to the list.

The game deals with themes of suicide. More than deal with them, the game openly explores the immediate – and then not so immediate aftermath of one, yours. Without spoiling everything, if you’re thinking of getting the game and want to experience the full gut punch, the less said the better, as it deals with its consequences through the eye of a very young character.

This isn’t something that I admit to often, or that is completely out in the open about me, but I’ve dealt with similar urges in the past. I’m often depressed, sometimes to the point where even getting out of bed is hard, and those thoughts, those “what ifs” creep in. Guilt for existing, feeling like such a burden that one doesn’t reach out to their close friends, pushing people away out of anger, in what really is a way to further distantiate oneself through loathing… I’ve been there. When it’s easier to self-deprecate to hide the pain and you wonder if anyone really would care or miss you if you were gone. It’s a mental road I’ve traveled often, and one where, I’m aware, I might return to in the future. This game deals with them in such a visceral, gripping manner, it blends them into the dialogue and the options so well that I almost worry for the Mental Health of the Developers. At the same time, though it’s hard and maybe something most people keep hidden, I believe that it’s something that should be talked about more often. It’s important to discuss it and Shadows and Dust brings it into a medium where it can be digested in a different manner. If Van Gogh can paint his depression, then why can’t a video game discuss it?

Earlier, I mentioned that this game is easy to get through, and that is the truth. The game is so focused on being an experience that it fails to have fail conditions. You literally can’t fail in the game, you can only regret your actions, or your words. When I say all this, however, it should come as an addendum that I’m talking about game difficulty, because there were moments where moving, continuing playing, was the last thing I wanted to do. Not because of any perceived lack of quality, but because it was leading me through a path I did not want to take to its unavoidable conclusion.

The last thing that hit me particularly hard in Shadows and Dust requires a bit of an explanation. There is a moment in the PS3 game Infamous 2 where, in broad strokes, if you have taken a particular path, and pushed your directions a certain way, you are supposed to kill your best friend. This character, one that you have grown to care about and laugh with over two games, has come into conflict with your goals, and you must end him. The game doesn’t pull any punches either. You’re the one pushing the metaphorical trigger, you’re the one who has taken the decisions so far, and you’re the one who gets to finish it. If you have taken that path, the game doesn’t continue until you do it, the button prompt taunting you.

It’s a powerful moment in a game I quite enjoy, and that was what I was reminded of when I got to the end part of Shadow and Dust. It’s presented in a ridiculous and fantastic manner, a machine where you flip a lever to do it. The same room where all the entire interactive sections of the game have occurred now has that added to it, and the items you previously interacted with provide no easy way out of this. There is only one way to finish the game, and you can’t do anything to avoid it.

The game’s Steam page says that some decisions can’t be taken back, and I admire the finality of it. This was the reason I played through the game twice, hoping I had missed something. I hadn’t. You can’t change what you did, or at least, what the player character did.

I hesitated before pressing the button. Earlier I had winced at how accurate the anger, the resentment, the question of ‘why it had been done’ asked by those left behind were, and I had full on ugly cry. As I moved towards this point when I realised there was no way out, I just stopped. I can count on one hand the amount of times a piece of media made me cry. The last one had been the Disney Pixar movie Coco over two years prior, but this hit just as hard.

It’s not a game for everyone, that much is clear. It’s got a limited appeal and it was hard to go through. It affected me so much that I hesitate recommending it. Not because it is bad, or because of presentation issues, which were the last thing on my mind as I played, but because of what it deals with. I approached it with the thought that its short length might have been an issue. Value shouldn’t be judged by gameplay time, but it very often is. An hour later that was the last thing on my mind. We have a rule at Indie Gamer Team, if we enjoy a game more than we don’t it gets the seal. I can’t say if I would qualify what I experienced with Shadows and Dust as enjoyment, but it kept me hooked. Maybe I was not meant to enjoy it in the same way I enjoyed the last Moloch Media game’s humor. I can say this though, it definitively stuck with me. If you feel ready for an emotional ride, maybe it’ll stick with you.

Shadows and Dust was developed by Moloch Media 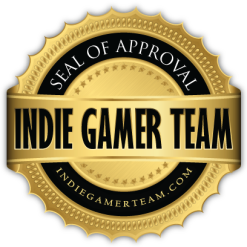 Mcportugalem has awarded Shadows and Dust the Indie Gamer Team Seal of Approval.