Fez is an interesting puzzle platformer developed by the now dead Polytron, and a guy who hopefully, is feeling a bit more happy in his life now. For those familiar with indie games, and the original “indie boom”, Fez needs no introduction. Fez was even featured in the 2012 documentary “Indie Game: The Movie”. For a title held in such high regards in the community, it’s weird how I’ve never thought to give Fez a look.

The main gimmick of Fez is that you control Gomez, someone only ever used to a 2D plane, as he gains the ability to shift the dimensions of three dimensional space. A concept that very easily could be amazing, or go down in infamy. You switch the perspective with the left and right triggers. I found doing this very satisfying, especially when platforming. Your job as Gomez is to collect thirty-two cubes and thirty-two anti-cubes to bring balance to the world. It’s decently simple on paper, but in practice oddly, mind-boggling.

There were times when what perspective the game wanted me to be in was unclear, but these times didn’t drag down the game too much. Fez uses its gimmick in dozens of unique ways, while not overstaying its welcome. Beating the game only took me about two hours. I found myself wanting more, but I prefer to have too little than too much.

Platforming in Fez always felt a bit clunky to me. Even at the end of my adventure, I still didn’t have a good grasp on jumps, and fell quite a lot. Jumping felt floaty and imprecise. I couldn’t slow, or speed up my momentum easily. Not anywhere close to Castlevania bad, but certainly tough to get around.

Presentation value was through the roof. Sprite work, 3D modeling, and sound design all went above and beyond to build a world that felt fluid, but broken. Like home, but distinctly alien. The ambient noises throughout each area often kept me wanting to look for more, even when I could just go ahead and progress. I often found myself humming the music of an area while playing, even if I can’t recall any of it now. 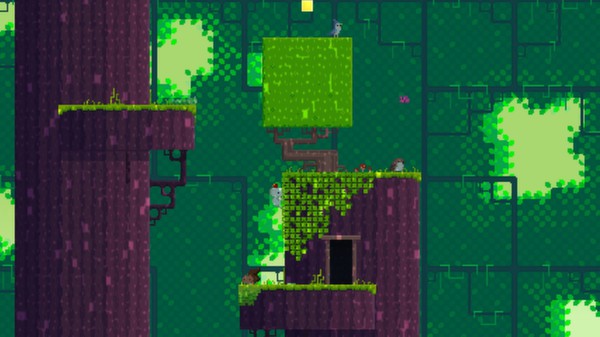 The beginning of Fez dragged on. I couldn’t get into it until about an hour into the game. Even when I revisited the first two areas, I didn’t enjoy them. The game holds its best cards until the halfway mark. This isn’t something I enjoy with games, and I won’t be defending it. Just like I won’t be waiting twelve hours for Xenoblade Chronicles 2 to get good.

As a bit of a nitpick, a lot of puzzles felt unintuitive. If I hadn’t looked up a translation guide for the alternate language I never would’ve even assumed there was a language to learn. There’s also a puzzle with a clock where you have to change your system clock to obtain the anti-cube. Nothing in the game told me how long I was supposed to go ahead, or that I should change the clock to begin with. Granted, there’s always going to be that spot of bird poop you just can’t clean off the windshield.

As much as I enjoyed Fez, I don’t understand how people can call this “the best indie game of all time”. I don’t regret my choice going back to it, and I recommend anyone who hasn’t played Fez to check it out. Fez easily earns the Seal, but I won’t find myself coming back to it any time soon.

Fez was developed by Polytron

Fez is available on Xbox 360, Epic Games Store, and Steam

Available for $9.99 on all platforms

An Epic Games Store copy was purchased by the reviewer