Bastion is a beautiful isometric action-RPG that attempts to merge storytelling and gameplay in a seamless manner. I’ll give you a basic run-down, but won’t be spoiling major locations or plot points. You play as a kid who just wakes up in the middle of a world after the calamity. All you know is that a comforting voice is narrating your adventure like a story. Your goal is to make it to the Bastion; a place designed to be a safe haven in a broken world. Your goal is to upgrade the Bastion, and yourself, and figure out what went wrong with the world, while meeting some friendly-looking faces along the way.

Few games have gripped me as immediately as Bastion has. The controls are intuitively laid out, and simple to understand. The character moves freely, but is directed on a grid, allowing quick, and snappy actions to be performed on the fly. Sometimes it can get hectic, but I’ll always prefer this to 360 degree input in top-down titles.

There are quite a few weapons for the kid to pick-up and master along his journey, and the player also gets a special attack slot. The player can choose any combination of weapon and special attack, assuming that the special attack doesn’t require a specific weapon anyways. This system allowed me to feel in control at all times. I did end up running into quite a few scenarios where I poorly misjudged what weapons I would need in what scenarios though. 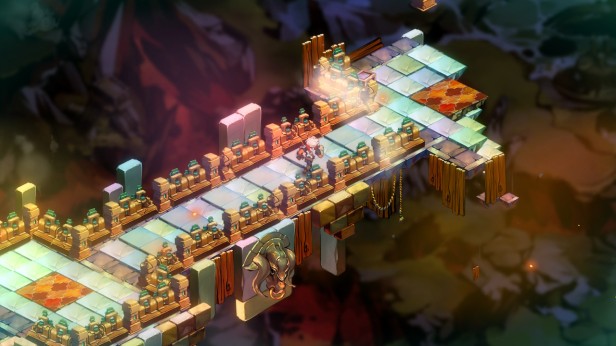 You, as the player, have access to health potions and black tonics. Black tonics allow you to use a special attack, it takes a specific number of tonics depending on the specific special attack, usually only one tonic per use though. Health potions refill your health no matter how low it is. This allows you to choose how you want to play the game. So you can risk it and only heal when the time absolutely calls for it, or you can play slow and methodically; it’s completely your choice.

There are many ways you can upgrade both the Bastion, and the kid. From basic leveling up, to upgrading the weapons you’ve found, and even background buffs. You’re given so many options that I found it overwhelming, yet I quickly got used to it with experimentation. As usual in RPGs I found something that worked, and didn’t deviate too much afterwards.

Presentation is of the absolute highest quality, from the beautiful 3D rendered sprites, to the music, everything in this game masters what it attempts. The sound design is so expertly crafted, that I always found myself feeling how the game wanted me to. I never realized how much the game was sucking me in. The visuals especially helped me dig into the story that the game was trying to tell, which is told almost exclusively through the narrator. The story and characters in Bastion really gripped me, even if it took me a long time to sympathize with them. I felt like this is how real people could understandably react in a scenario such as the calamity, especially the main batch of “Bastionites”. When end-game rolled around, the final straws of story had me very emotional. 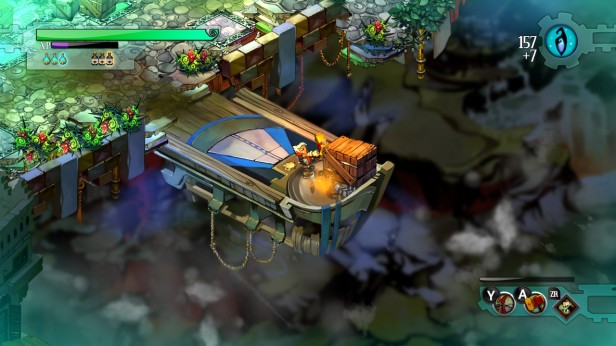 I want close attention to be paid to what I just said, “When end-game rolled around”. Bastion has so much to do, so many places to visit, yet I felt like it just dragged on. Some of you may remember my tweets from this play-through, even if I never explicitly stated what the game was. I was under the impression that the game would be about six and a half hours long; I spent about eleven hours playing through it casually. It was a good time, but definitely not the best it could’ve been. The game never has a Kingdom Hearts-like “falling apart”, so rest your worries. [EDITOR’S Note: You… you really just sad something bad about that game? You realize what the fans are going to do to you right? I guess it’s time to get a tombstone prepared for you.]

There were a couple of other big flaws that I noticed in my time with Bastion. The narrator got on my nerves quite a bit in the beginning. I found myself wanting to get him to shut up about the simple things. Yet, as the character of the narrator expanded, these wishes died out. A big gameplay flaw I saw was the shield. It could just never snap on to the enemy I expected, or wanted it to. Granted, there was never a time this killed me.

All in all, Bastion is a game that you should experience. In this marathon, I’m looking at the “quintessential” indies of the past. Bastion certainly deserves that title. The price may look threatening, but if you’re a fan of similar titles it is definitely worth your time. I don’t regret the chance I took on Bastion. If you’re on the fence, pick it up during a sale. The game I feel doesn’t play specifically to either keyboard, or controller. So I recommend grabbing it on your platform of choice!

Bastion was developed by SuperGiant Games

A Nintendo Switch copy was purchased by the reviewer

One thought on “Bastion”