I was excited about this one because I’ve played the other Spellsword titles on mobile, and was pretty impressed overall. Ever since Slay the Spire reached popularity, card game roguelites have elevated from what I would consider a niche status to approachable. Tabletop games have been evolving over the years, with digitization of their rules and smoothing the learning curve via tutorials. DungeonTop takes the original deckbuilding mold, and puts in a chessboard-like, abstract component that really adds to the decision making normally found in these games. While the appeal of creating a powerful engine by the time you have honed your deck is still present, considering enemy and friendly unit positioning alongside other attack properties are welcome elements to the genre. As of release, the game is still in early access, and is only held back by a lack of experience and rigorous back and forth with its audience. Fortunately, its Discord (https://discordapp.com/invite/SjzrwSR) is active, with community members providing a good benchmark of how what strategies are popular, and gauging the power curve throughout runs. So far, with two different character classes with two starter deck pools, the game has a good sample to start off with just enough variety to encourage experimentation. Over patches, I look forward to seeing tweaks to potentially underpowered cards, and new enemies. There is just enough good to entertain despite being a WIP, and iterations have been pushed at a steady rate. 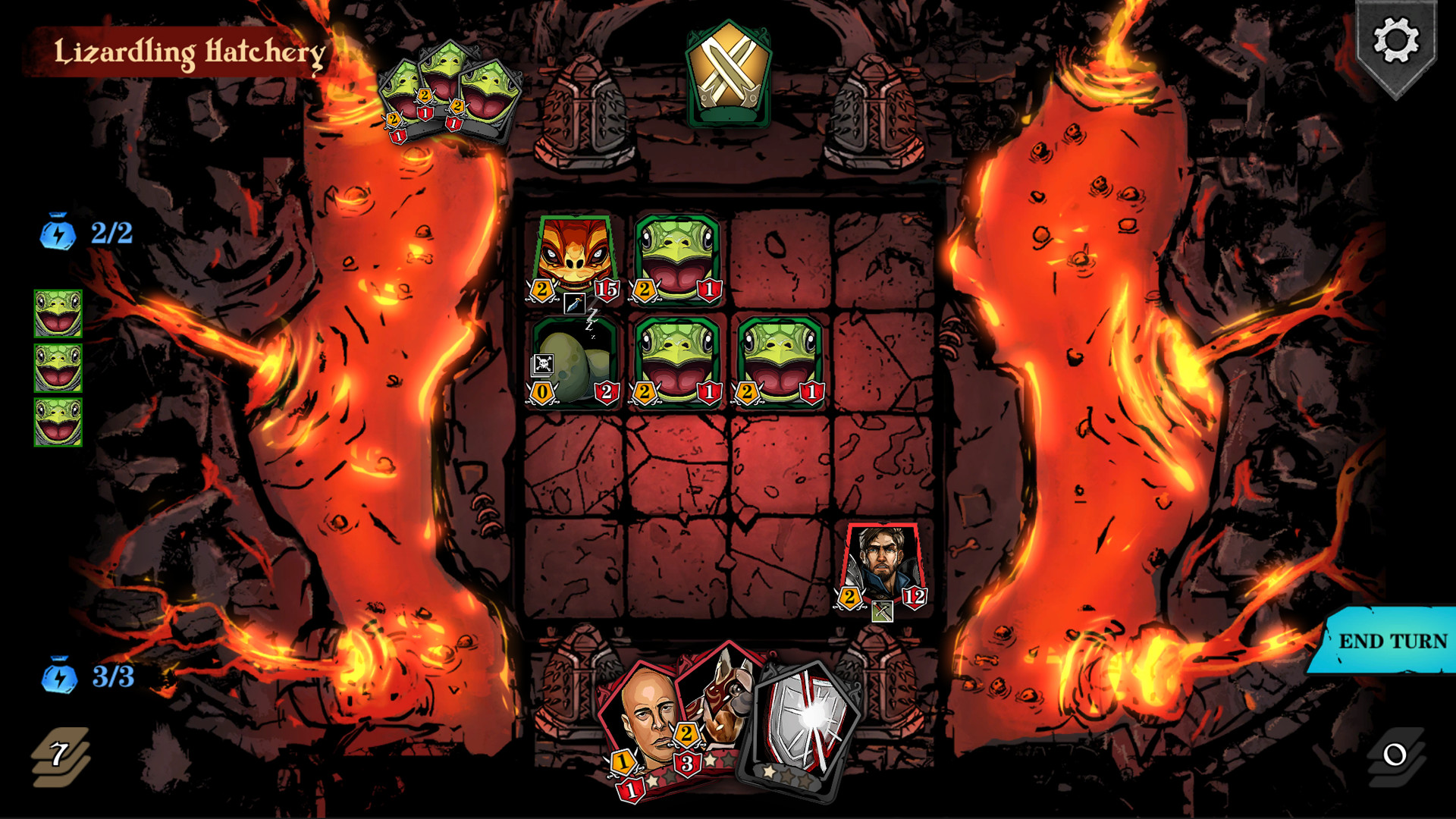 DungeonTop presents itself as a dungeon-crawler, with mysterious paths leading to events, various monsters, and NPCs (Blacksmith, Healer, Shopkeeper, etc) that can help strengthen your deck and keep you alive. Once you die, you have to recreate your character and start a new journey through the dungeon. So far, there aren’t any player progression markers that unlock additional abilities during later runs. Achievements do exist, rewarding quick completion times, how efficiently you defeat bosses, etc. A lot of the fun of the game involves controlling space, slowly squaring up just out of the range of your enemies, learning how the AI attacks, exploiting it by baiting weaker units, and surrounding the enemies, since creatures can only be played next to another creature or hero. There are a few different types of cards: weapons modify how your hero attacks (auto-equips each match), creatures are deployed and act like a hero, spells perform a single action, and treasures are above-average strength cards that can be traded for other goodies. The devs are focusing on how players may leverage exchanging treasures for things like upgrades, culling cards, healing, etc. I’m a bit torn on how balanced this is, because I often just wait for a marketplace just to buy high-level cards and call it a day. I still like the general power level of treasures at this time, because they can help bolster an underperforming run.

Level-ups provide a character upgrade across three separate paths, with each enabling passives that can shift the type of cards you add, or encourage certain playstyles. Personally, I had a fun run with doublestrike for an additional action on my hero plus a full-level bow for strong, safe attacks. Combining all of this with a passive giving penetrate to this attack, I could massacre several enemies in a line. Most of the goodies are pretty nice, and I tended to spread across a bit of everything. Exploring synergies like the example I gave, represents the possibility for player expression and mastery of the mechanics. For early access games, some people have different standards of when they think the game is worth buying. I personally think there’s just enough to enjoy yourself and perhaps give feedback. People on the fence can join the Discord, engage in the balance and updates discussions, and keep an eye on the game.

Spellsword Cards: DungeonTop is developed by ​One Up Plus Entertainment