Relatively quick review: Conglomerate 451 is a rogue-lite, dungeon crawling RPG set in a cyberpunk, dystopian world. You are a rebel group armed with cloning technology, using this power to slowly but surely attempt to overthrow 4 corrupt conglomerates overtaking society. You start off with 3 classes with other features locked behind earning tech, money, and reputation. The core gameplay loop is simple, but effective: traverse dungeons reskinned as high tech facilities, complete objective, tech tree, upgrade units, back into the fray. Conglomerate does all of this well enough, but I think there’s a sense that your units only marginally improve, with customization options primarily affecting newly created units. This coupled with the fact that your units’ movesets are unchanging sans new clones makes it so that optimizing your favorite units is just not central to the game.

This can make gameplay a bit stale over time, while new enemies test your build, the rpg combat can start to become a bit repetitive. Fortunately, a few lootable cybernetic enhancements can break the tedium, as with seeing your progress towards thwarting the conglomerates increases. Besides combat, there are the occasional hacking puzzles involving either clicking out bits of code scrolling down the screen, or rotating key puzzles. In this way, the game is very streamlined, which has its pros and cons. On one hand, levels can be easy to quickly pick up and complete within 10-15 minutes at the most. On the other, as discussed previously, level layouts are nearly barren and are mostly just set pieces for a gauntlet of battles. Delving into battle mechanics, it’s pretty standard turn-based combat: your squad of 3 units have an initiative value determining turn order, and can pick from 4 moves. There is very little in the way of resource management, as there is no mana or energy to worry about. Batteries are important for replenishing shields (your firstline defense from losing precious health and skirting permadeath), as well as the occasional enemy stat hack. Most strategy involves managing damage over time statuses, maximizing critical hit chance, and incapacitating enemies whenever possible. There is a body part aiming aspect to consider, as hitting certain areas can modify your accuracy or apply debuffs. All this said, fighting is mostly engaging, even if there aren’t too many diverse build paths. At the very least, varying character classes have some fun tools to mix and match, leading to a decent amount of replay value. 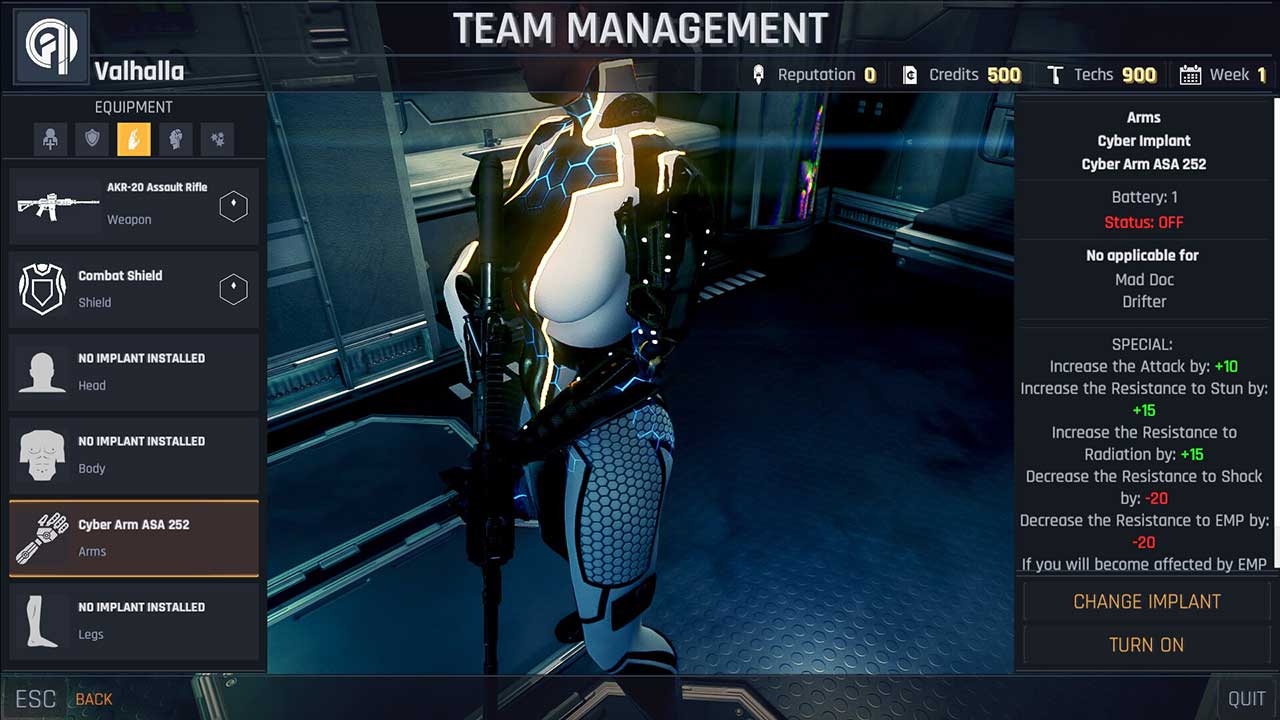 Back at base, there are options to remove intoxication or stress that can lead to permanent traumas (aka crippling debuffs), base upgrades, and creating clones. Units placed in the med bay must wait a whole mission out to heal, so it brings the chance for new recruits to fill in the gaps. The tech tree is used to unlock the ability to strengthen new characters with special passives on creation, and eventually unlock equipment upgrades that will help you scale to mid-late game. The tech tree is a bit basic, but perfectly functional. Creating a character is as simple as picking a class, choosing its four moves in battle, and picking enhancements. The UI is very intuitive, and the tutorial is quite comprehensive. One minor complaint is the fact that you cannot quicksave and quit during levels, which means you have to return to base to properly end play sessions.

All in all, Conglomerate 451 is a perfectly serviceable dungeon crawler RPG. The big elephant in the room is Darkest Dungeon, and while this game does not compare too favorably, I can still recommend this for new players who might enjoy the different theme and setting. The developer is actively refining the game and applying quality of life changes. It’s a good sign that the game can only get better.

Conglomerate 451 is developed by 1C Entertainment

Hellfirebam has awarded Conglomerate 451 the Indie Gamer Seal of Approval… without much fanfare.