Summer in Mara is a cute lil adventure game where you play as a young human girl named Koa. She and her adoptive parent, an alien named Haku, were the only inhabitants of a small island. Well Haku dies offscreen, leaving Koa to survive on her own on this island. She does so but eventually decides to go out exploring their small world of Mara. The story consists of her stopping another alien race from polluting the planet, which is mostly water, to its death with offshore drilling. Make of that, and analogues to our real world, as you will.

The game is mostly a farming and fetch quest game. Haku told Koa to help everyone she met, and so she does. At least she’s supposed to, and that’s where most of the game time is spent. If you ignore that the game is fairly short, and I’m not even sure how completable it is if you aren’t doing all the side quests. Most of them involve fishing or giving them fruits/veggies. You can plant fruit trees on your island if it has enough well water, and you can build wells to allow you to have more trees on the island. You have up to a maximum of sixteen plots to grow veggies in. You can use well water to speed up their growth and eventually fertilizer to get one and a half times as much yield, which sounds more impressive than it is, it goes from four veggies to six. Later in the game you can even go about taking care of a few types of animals for resources too: chickens for eggs, sheep for milk, and pigs for truffles. You have to feed them veggies and grains in order to get their resources.

The rest of the game is spent exploring the world, searching around islands, digging up treasure, occasionally diving, rescuing the animals mentioned above that are stranded out at sea, and using your boat to get around. Dives are simple and fast, you go down and swim over chests to get their loot, swim into bubbles to get air, and swim back up to the life preserver to get out of the water. These dives take anywhere from fifteen seconds to thirty seconds; they’re super fast. Rescuing animals is simply finding them while out boating, picking them up, and bringing them back to your island, again, another super simple thing. You find treasure by treasure maps, and you can’t dig on an island unless you have a map that says you need to dig on that island even if you’re looking at something that is clearly meant to be dug up. 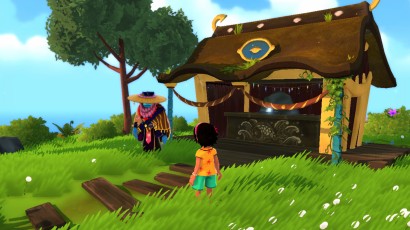 The game is made so simplistically because it’s for kids, but the story is really nice and the characters were fun. I think even adults can get a kick out of this. It doesn’t have much to it, but if you’re trying to do everything it feels like there’s a lot to do which is the important thing. Overall, I rather enjoyed it even if some parts of it occasionally annoyed me thanks to running out of items so often and needing to farm so much. Personally, farming games aren’t exactly my forte as I’m not a patient woman, like at all. I want my instant gratification. Getting bait for fishing was the worst part though, as you collect them from tiny buckets, but it only gives you like one or two pieces of that bait and there are a bunch of different types. Just having enough constantly was irritating cause you can’t buy anything in any meaningful quantities. Five, that’s how much you can buy of most things at any given time, which is around fifty or so less than I’d like to buy at any given time. Everything else was great though, the art style and characters were both adorable, character interactions were often fairly funny. It’s just a cute, fairly light-hearted game.

Summer in Mara was developed by Chibig.

Point of Sale: Steam and Switch.