Taken Away is a first-person, escape the room type horror game. You crashed your car thanks to some sort of giant monster thing and you’ve been caught by some other man and strapped to a chair up in his attic while you were out. You have to get out of there before you’re killed. 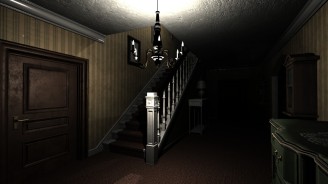 There is an interesting element to this, as eventually the man comes home and you have to avoid him. He also has a pet dog that will attack you as well if it catches you outside the house, and you do have to exit the house. The game also changes where items are placed in each playthrough, so you can’t just learn where they are and wam bam thank you ma’am fuck right off out of the place lickety split. No, you have to constantly search for the items to escape this hell hole.

There is one big issue with the game to me, and it’s that everything is pitch black unless you flick on the lights. It’s impossible to get your bearings otherwise, but being in the light means you’re going to be found. There are no brightness settings either. As such, the game has inflated unnecessary difficulty because, outside of being in light, it’s 99% just pure inky blackness of the void to such a degree there were times I wasn’t sure if I was looking forward, down, or up. That honestly ruined the game for me because it’s just too hard to get around to find your way. It’s hard enough just finding the items, but when you can’t see most of the level it becomes way too hard. I kept playing it on the easiest difficulty and never once managed to escape. I think I came close a couple times, but I’m not really sure, and it’s all because I can’t see where I’m going most of the time. 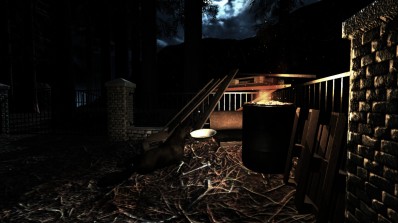 I like the concept of the game, it’s interesting, however the follow-through leaves something to be desired. If we could see things and had brightness/gamma options, I think I’d like it a lot more, but without that, it’s just too hard to see and therefore too hard to play. If you can’t see things, you can’t find things. If you can’t find things, you can’t escape. If you can’t escape, then you can’t win. If you can’t win, then… well it’s a measure in futility. But maybe this is just because I can’t see worth a damn. Maybe people could see outlines in this blacky ink that is the night in this game, but I can’t and I can only view the game from my own experience. Hopefully the darkness is fixed so that you can see sometime in it instead of pitch black, and maybe have time move much more slowly, I know I had trouble getting as far as I did each time. I even played it on easy which gives you a lot of extra time before you just flat out die, causes the man come home later which means you can snoop around his house getting the items more easily as you won’t have to dodge around him constantly, and makes the dog friendly instead of hostile. And with all those boons, I still had trouble getting as far as I managed to. When the game leaves early access I’ll take another look and see what I think at that time.

Taken Away was developed by EYE-JAM STUDIOS and Damien Sueur.

A review copy of the game was provided by Damien Sueur.

darkmikasonfire doesn’t think that Taken Away is something worth keeping your eye on at this time anyways. Updates might change that, but for now, no.