Little Red Lie is a game about lying. Lying to your parents; lying to the world; even lying to yourself. It’s a game about that moment when your entire world has gone to shit and you say to yourself “tomorrow will be better”, but you know it won’t, because you’ve been saying the same thing for years and it never gets any better. Ironically, this make it one of the most honest games I’ve ever played. The game tells a Brutal Truth, one that’s hard to sit through but well worth the effort.

The story centers around two protagonist, Sarah Stone and Arthur Fox, who live in vastly different worlds, but who both soon find themselves struggling with debt and the oncoming of poverty as the game goes on. The circumstance and outcomes of this are as vastly different as the two characters are themselves, and the game paints a bleak picture with the juxtaposition of its two leads.

Little Red Lie isn’t a fun game. Hell, it’s not even a pleasant one. But it is gripping, engaging, and honest.

Sarah is a 30-something woman living with her parents and younger sister. As Sarah struggles to keep hidden the fact that she was recently fired, her family struggles with the mounting medical debts due to both her mother and sister needing expensive medications. She feels like she’s a disappointment to her family and tries to not let the guilt of that overwhelm her. But as things go from bad to worse, you begin to see desperation take hold. There’s so much tension, depression, and anxiety that you end up waiting for her to either explode or simply give into nihilism and just up and outright die emotionally.

There’s a really great scene where one of her parents ends up in the hospital. Sarah exposits that she knows the nurses are overworked and that they can’t care about her and her loved one as people. They’re patients, one of many. But to Sarah, the nurses are still a bunch of cunts for not helping faster, for not putting her needs first. It’s disheartening, but it’s human, it’s honest and it’s understandable. We all have our selfish moments, especially when it comes to our loved ones. On top of that, she’s not just feeling powerless to help those she loves, but you know in the back of her mind that she’s thinking “If I was smarter, if I was a better worker, if I had saved up wiser; they’d be in a better hospital, able to get some real help.” 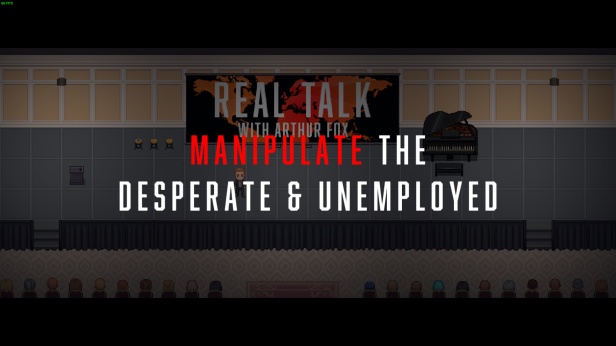 Arthur Fox, on the other hand, is a wealthy financial guru who writes self-help books he doesn’t read, gives talks to people he doesn’t care about and uses his wealth to do as much blow and hookers as he possibly can. He’s Jordan Belfort by way of Donald Trump. He spends most of the game talking down to people and being the exact kind of rich asshole you’re expecting. The game easily makes you want to see him fall from grace, but when it comes it’s not as cathartic has you might have hoped.

As I said earlier, Little Red Lie’s biggest strength is how honest its story is. Arthur Fox is an ass, and creator Will O’Neill clearly has no love for how unaccountable the wealthy have become. But the character is also a man gripped by addiction, and the game never treats this fact like anything other than what it is. The game doesn’t use this to excuse Arthur’s actions (and he does some truly inexcusable things), nor does the game use the fact that he’s an ass to undermine how painful addiction is. That kind of extreme honesty, mixed with how impeccably well written the game is, made it hard to get through at times.

At around 8 hours long I should have been able to beat this is an afternoon, but it took me the better part of a week to get through it as the experience was so damn emotionally draining.

I can wholeheartedly recommend Little Red Lie based on how strong the writing and narrative is alone, but there are a few things I have an issue with; first, the gameplay. Like with most interactive fiction, you don’t really do much. All interactions are based on a lie of one form or another. You move around an environment, find an object or NPC you can interact with and you lie. You lie about remembering someone, or you lie about wanting something or you lie about the effects of something. But all you, the player, are really doing is finding the objects that will prompt the character to monologue or speak. At times the game offers you a choice of a characters internal thoughts, but this has no real effect on what they say or do afterwords.

To the games credit, it’s not as easy to say here that “this would have been better as a passive medium” as with other games of this type. The ability to know what a character is really thinking and feeling, to parse out the lies by coloring them red gives each line more depth and nuance than could be achieved in other forms of media. In the end though, I still wish more games with something to say found a better way to convey it without limiting interactivity.

If you do decide that limited interaction is the best way to tell your story, at least polish what’s there. This isn’t a very big issue, but for a game with as little to do here, it was far too common for me to get stuck on the set dressing. On top of that, the objects and NPC’s force you to be at a certain angle before you can interact with them. This forced me to spend way too much time going back and forth, trying to get in the right spot in order to get the character’s insight. While this is a relatively minor issue, it really began to get on my nerves over the course of game.

Little Red Lie isn’t a fun game. Hell, it’s not even a pleasant one. But it is gripping, engaging, and honest. Brutally, dreadfully honest. It’s one of those rare games that has something to say, and says it with an elegance often unseen in the medium. The game’s writing is both down to earth and darkly poetic in equal measure. It’s a game that resonates with me in ways I can honestly say I wish it didn’t. I wish I could talk more about how poignant and heartbreaking this game is, but to do so would make it a vastly less interesting experience. Characters ask themselves questions that I’ve asked myself and feel ashamed for, and talk about people the way I feared my friends and family talked about me. Little Red Lie has a laser focus on own my fears and anxieties, and represents them with an accuracy unlike anything else I’ve ever witnessed.

$9.99: This game is totally not worth the asking price.