The JRPG is one of the oldest and (arguably) most respected genre’s in modern gaming. Because of this, it’s not hard to understand the draw it has for retro-obsessed indies. The 16-bit area saw some of the best the genre has produced, specifically 1995’s Chrono Trigger. Not only does Chrono Trigger still regularly top “Best of” lists, Cosmic Star Heroine proves it’s still inspiring developers. The question though, is if the game is as good as those that inspired it. I can think of a Mighty Number of games that weren’t. At least 9 or so.

You play as Alyssa, an agent for the Agency of Peace & Intelligence. (Editor’s Note: The Agency of War & Ignorance wasn’t hiring, apparently.) After completing a mission early in the game you find a device that can be used to control minds. When it’s discovered that the head of the Agency plans on using the device, you decide to defect and join a group of rebels to protect freewill in the known universe. (Editor’s Note: Nevermind, they just had an opening.) The games story might not be “original” in the strictest sense, and includes pretty much every JRPG trope in the book, but I thought it was enjoyable. However, the game does have one issue: the pacing.

Cosmic Star Heroine is comprised of 13 chapters, which took me about 8 hours to beat. However, the game doesn’t really open up properly until around chapters 7 and 8. So, in other words – you have to play about half the game before it really starts. However, the first chapters only took me 2 hours to clear. The game rushes you through, then slows down shortly afterward, but it never exactly feels that way. Dungeons are typically pretty short, most only comprising of a few rooms, and mini-objectives don’t usually take too long to complete either. The game is constantly rewarding you for putting in 10 minutes of your time, but makes it hard to want to keep playing more than that. So, I think my real issue was the fact that I played it on a computer.

This kind of structure is begging for a mobile platform. This is the game I really wish I had when I was… (don’t make a bathroom joke) …on the bus heading to school or… (dude, you’re better than this) …waiting for classes to start (thank god) or when I was stuck on the toilet taking a never ending crap (Editor’s Note: And there it is…). I kind of hated sitting at my desktop to play this, but began to enjoy it a little more when I downloaded it on my laptop where I could play it laying in bed; but that wasn’t quite enough. Do not misunderstand: I am not saying Cosmic Star Heroine is a bad game. It’s good. This is one of the easiest seals of approval I’ve given. Yet, playing this on PC took a game that should have been a Game of the Year front runner and pushed it down to an honorable mention at best.

Outside of that, I do have one issue with the narrative. I said the game indulges every one of the JRPG cliches, and that means my least favorite one: the last minute bad guy change – and the game does it TWICE. The first time is understandable and somewhat justifiable; but the second time is done in the last chapter, for a villain with no buildup that seems like it was desperate trying to give the story a sense of scale when the game is LITERALLY ABOUT SAVING FREE WILL IN THE KNOWN GALAXY!

The gameplay has a few stumbling blocks too, but it’s more or less your standard JRPG fair. If you like turn based, menu driven combat, then it’s an easy enough sell. Each character has two forms of abilities: The first are your basic combat abilities. As you level up, everyone learns new moves Pokemon style, but you can only ever have so many equipped at any one time. Most of these you can only use once before needing to rest and recharge.

The other ability set is based in your equipment and stats. On top of weapons and accessories, each character can also equip a shield. So long as you have the required “Hackatude” stat, these bestow more abilities to the character. It’s here were the gameplay first trips up.

There are no random battles in Cosmic Star Heroine. Like in Chrono Trigger, you can see your enemies and often you can choose if you want to engage with them or not. If you do, the battle takes place on the same screen after characters get into place. However, Chrono Trigger allowed you to leave an area and come back to replenished enemies. This allowed you to grind and improve your stats if that’s something you’re into, which I very much am. That’s not an option here.

As I said earlier, dungeons tend to be pretty short, so there aren’t a lot of monsters to fight in the first place. And with the exception of a few optional bosses, I fought everything I saw. So as I was nearing the end, my stats weren’t bad, but I couldn’t use certain items because they weren’t high enough. I think this was meant to incentive going back to the games few planets and doing side missions, but just fighting what came up as the story played out kept me feeling like I was on the cusp of overpowered throughout the entire game. It wasn’t even until the final chapter when I had my first character die.

That leads me to my next issue. I found three usable items in the game, none of which healed or revived party members. The only way to bring a character back from the dead or to heal was to have a character with that ability on the team. So not only do you have to have one of your three team mates beside Alyssa be reserved for the healer character, you also have to have one of their abilities reserved for healing. This isn’t something I’d normally complain about, but the structure of combat makes it an issue.

There are few party-wide healing abilities, and none that I know of that occur on the turn you use it; so you’re stuck with healing one character at a time for most of the game. Not only that, but as I said earlier, you can only use most of the game’s skills once before having to recharge. So, if all of your party needs to be healed, you have to heal, recharge, heal the next party member, recharge, and so on. One character, who was my main healer, did have another skill that allowed the next skill she used to effect all allies or enemies, but that still meant that basic healing took two turns. The only thing that stopped this from becoming a real issue was, like I said, just how powerful I felt. Fights rarely got to the point were I really felt like if I didn’t heal right now I was going to lose.

This almost had me wishing for a normal MP meter for abilities, and at face value it’s easy to say the system was poorly balanced, but after finishing the game I can’t really commit to either of those statements. In combat, outside of healing, this system works really well and offers some truly interesting choices.

Most of the attacks have some kind of bonus attached to them, but come with prerequisites. Some attacks do extra damage if the enemy is at full health, some do more when they’re below half. One character had an attack that did more damage based on the number of other skills she used. By the end of the game I had a default strategy in place, but experimenting with new abilities was more fun than in most other games of this type.

For comparisons sake, as I write this I’m finishing up Persona 5. In that game when a character gets a new ability I just swap it out for a stronger version of itself. “This attack does high fire damage? Okay, goodbye medium fire.”. In Cosmic Star Heroine, it often did felt like I was losing something by not having certain skills assigned, and knowing I couldn’t just repeat a pattern over and over again kept me invested in almost every fight.

I like Cosmic Star Heroine. As I said, it’s one of the easiest seals of approval I’ve given. But the game has one excusable issue. See, I got the code for this back when it was in beta. The dev was looking for issues to fix. I found one, I mentioned it to the dev on twitter, and after an update the game started with a message saying “I’m aware of this issue”. So then, let me ask you a question…

WHY THE FUCK DOES THE GAME STILL CLOSE WHEN I CHANGE THE ASPECT RATIO. The “quit to desktop” option being buried in menus? I’ll live with that. Odd narrative pacing and wonky difficult balancing? Meh, I can deal. BUT WHY THE FUCK CAN’T I WINDOW THE FUCKING GAME SO I CAN MESSAGE SOMEONE ON SKYPE WITH OUT THE FUCKING GAME CLOSING. IF I WANTED TO CLOSE THE FUCKING GAME, I’D WOULD FUCKING CLOSE IT.

Overall though, it’s a good game. I totally recommend it! 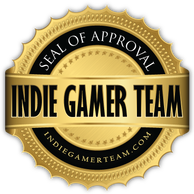