Now before you ask, this was ripped straight from the madlad dev himself: “Cymatics are how sound impacts matter and Muffs are the big headphones that the characters wear in-game. Cymatically Muffed is a play on how listening to good music can help you perform better.”

Cymatically Muffed is a challenging, top-down arcade shooter reminiscent of popular indie darlings like Hotline Miami or Katana Zero. When I first loaded the game, an adrenaline shot of nostalgia flowed through my veins, harkening back to my experiences playing Stickmen flash arena games on the likes of Newgrounds or Armor Games. Slight tangent, but the main menu music is suuuch a banger, probably one of the best tracks in the whole game. Let’s just pretend I’m leading with presentation this time… So the next thing you’ll notice in the menu that surprised me is how much the game actively promotes remote play. The game WANTS you to have the option for one host with the game to share in multiplayer havoc with up to 8 players, all of whom do not need to have a copy of Cymatically Muffed! It reminded me of the Jackbox games in the best way, and I really respect how the developer is pushing for that form of community. I won’t dwell on it too long, but especially in these trying times, I love these small experiences we can share to help keep us afloat and hopeful. 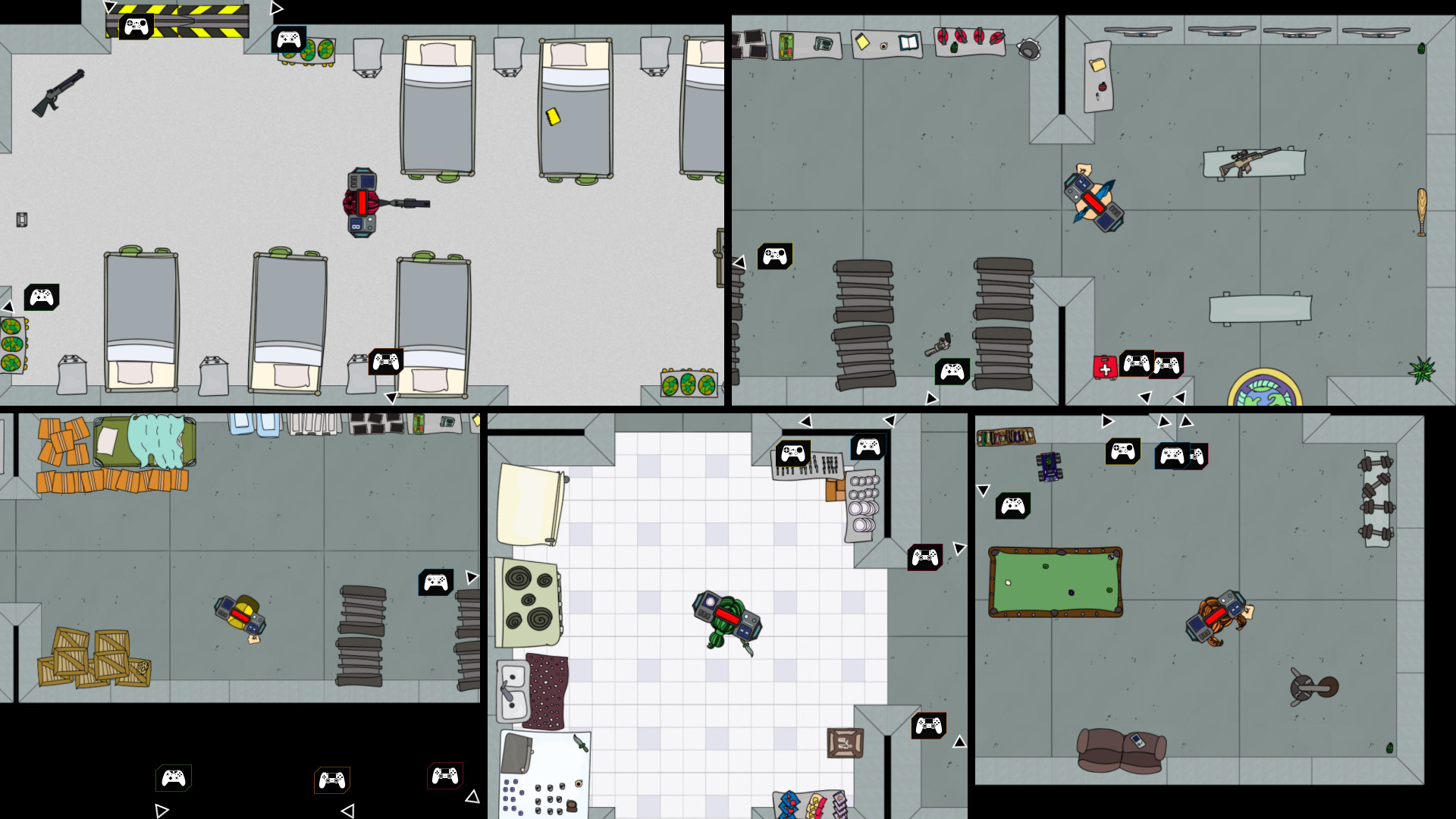 Cymatically Muffed is primarily a single/co-op experience, with a local multiplayer deathmatch mode on the side. There is no online multiplayer component with the exception of sharing user created content. I may as well quickly go over that now, as I have the least to say about it. In short, the game takes you out to a web application where you do your thing and import it back into the game. It seems robust enough, but looks like it has a bit of a learning curve. The developer was gracious enough to provide ample documentation and guides, so I’m sure anyone can easily take a deep dive if they’re inclined. As mentioned before, the game heavily capitalizes on the advent of Steam Remote Play, and with the exception of some wonky resolution options I had to fiddle with (hopefully an isolated case), I was able to play through the co-op with a friend across the coast. The game offers controller support, and the option to use split screen or show both characters from the host’s perspective was appreciated. The co-op can actually support up to 4 players, while the multiplayer deathmatch can support up to 16! Mind you, only one person needs to own the game, so you can really have a party.

The campaign experience is pretty fun. Level layouts are never randomized (or if they are, they aren’t reseeded after each attempt). This allows you to entirely bypass challenging sections of the level after you figure out the path of least resistance. Now, the game does a good job of rewarding more challenging rooms with a souped-up weapons cache. The game constantly evokes a scavenger mentality as you scout and clear rooms. Ammo and health resources aren’t scarce per se, but death can come from anywhere if you aren’t prepared for what’s behind a door. There are opportunities to utilize hacked cameras to gain useful intel on rooms that either provide access to rare weapons, or inform you the location of a keycard. The controls are very tight, although it may take some getting used to the aiming and fast movement if you haven’t played something like Hotline Miami. I really enjoy how different weapons affect your movement speed and other properties: rocket launchers have kickback and weigh you down, while the katana lightens your step. I think the weapon balance may be a bit off, as weapons like a crowbar are often outclassed by even the common pistol. But I think it’s okay since the game is balanced around earning rare, stronger weapons through challenging enemy layouts. I entirely avoided using melee weapons unless my hand was forced: I found it nearly impossible to kite enemies to avoid taking damage. It could be a matter of mastering these weapons, and situations such as tazing an enemy only to switch to a ranged weapon while the enemy is discombobulating can be satisfying. There are bosses to supplement each level, as well as comic panels that present a very simple story. Overall, I found the experience enjoyable, even if there’s a bit of a skill ceiling.

Not much to say about multiplayer. It’s just simple, crunchy deathmatch fun. While there may not be different game modes, experimenting with 40+ weapons is a great time. The game is very fast paced, and the fact that you need to be cognizant of ammo, and constantly scour the map for weapons keeps gameplay fresh. Good stuff all around. I can see some players getting frustrated with someone pressing their lead and spawn camping characters that start off with an inferior weapon. In that way, the game borrows a bit from battle royales, but you get sent back into the game so quickly, I doubt it’s problematic.

Overall, Cymatically Muffed is modestly presented, but more than compensates with refined gameplay and bursts of arcade goodness. The more meticulous gameplay of scanning rooms and figuring out the optimal path to the exit is a strong suit. As a couch multiplayer fan at heart, I love how the developer proudly advocates for remote play, as it is a relatively newfound feature in Steam’s history that should not be overlooked. As a side note, I find it adorable that the developers are a wife and husband artist/programmer duo. Keep it up, you guys! The few voices in the game, which I assume they both provided, are especially charming knowing this. An easy recommendation (but maybe wait for a sale if you aren’t immediately sold).